ISIS cancer spreading to a new battlefield - The Horn News 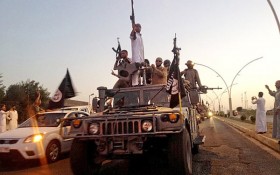 Nations fighting the Islamic State discussed Tuesday how to prevent the extremist group from gaining a stranglehold in resource-rich Libya, though no one appeared resolved just yet to launch a second military intervention in the North African country this decade.

Speaking at a 23-nation conference in Rome, U.S. Secretary of State John Kerry said the last thing anyone wants “is a false caliphate with access to billions of dollars in oil revenue.” He said the U.S. and its European and Arab partners should increase security training and help Libya’s military “not just to clear territory, but to create a safe environment for the government to stand up and operate.”

More than four years after a U.S.-led military effort helped topple dictator Moammar Gadhafi, Libya is mired in chaos. Since 2014, it has been split between two rival authorities. A new unity government still doesn’t have parliamentary approval.

Amid the chaos, an Islamic State affiliate has carved out territory in the center of the country and fighters, wearied by coalition air strikes in Iraq and Syria, are flocking to the new front.

Last week, U.S. Defense Secretary Ash Carter warned that IS militants were trying to “consolidate their own footprint” in Libya by setting up training sites, drawing in foreign recruits and using the levers of economic power to raise money through taxes. The U.S. won’t allow the group to “sink roots” in Libya, he said, but provided no indication of any U.S. military campaign was imminent.

European countries, too, are weighing options.

Italy, whose southernmost territory is less than 300 miles from Libya, has indicated it would participate in a U.N.-authorized peacekeeping or stabilization mission. It has moved aircraft to a base in Sicily, but insists that any action first requires a stable Libyan government and other international assistance. The instability has led to hundreds of thousands of migrants using Libya-based smugglers to reach Italy.

A senior U.S. official attending the talks stressed that “when we see a threat to the United States or external plotting, we will not hesitate to act upon that threat.” He cited a November airstrike that that killed Abu Nabil, a top Islamic State leader in Libya.

But any broader campaign would require talks with coalition partners and the Libyans, said the official, who briefed reporters on the discussions on condition he not be quoted by name. He said President Barack Obama convened a National Security Council meeting last week “focused on the Libya question.”