Is it a dime, or a nail? Either way, it's worth BIG bucks - The Horn News 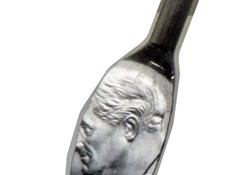 In probably one of the oddest items to come to the world of coin collecting, New York-based Heritage Auctions has announced the sale of a Roosevelt dime that was accidentally (or some say deliberately) struck onto a zinc nail.

Yes, that piece of ironmongery used to repair your roof.

In the billions of coins it has made over its history, the U.S. Mint has made more than a few errors. There were Lincoln pennies that were struck onto the material for a dime, Washington quarters struck more than once, wrong dates on coins, etc. Most errors are caught by the Mint, but occasionally a few make it out into circulation. Those error coins have been highly sought by collectors.

This error coin coming to auction in January in Tampa, Florida, is one of the more bizarre errors to come to public attention. In a weird linguistic twist, another name for the 2-inch nail is a sixpenny nail.

“It is certainly the most unusual item I have had to catalog in my career,” said Mark Borckardt, the senior numismatist at Heritage New York-based Auctions. A numismatist is person who studies or collects coins or bank notes.

It is not the first coin printed onto a nail, however, said Fred Weinberg, a coin dealer considered one of the top experts in error coins. A few pennies in the late 1970s were struck onto nails. This dime/nail is undated, so there is no way to tell when the item was created. Weinberg said it is possible the dime/nail was made on purpose by a rogue Mint employee.

Despite it not being one of a kind, Weinberg says, there are probably only about a half dozen coin/nail examples known and only two dimes. He expects the dime/nail to sell for roughly $10,000, but public interest could raise that amount.

A spokesman for the U.S. Mint was unavailable to answer the question of whether the nail/dime is considered valid currency.

The Heritage auction that includes the nail/dime also includes several other notable error coins. There will be a 1943 Lincoln penny struck in bronze, which would seem not out of the ordinary except for the fact that the U.S. Mint changed the composition of the penny in 1943 to steel to save copper for the war effort. 1943 bronze pennies typically sell for $200,000 to $300,000.

On the flip side, Heritage will also be auctioning a 1944 penny that was struck in steel, not bronze.

The auction for the dime/nail will be Jan. 6 as part of a larger Heritage auction. Electronic bidding for the coin has already started, however. The current price for the item is $3,200.