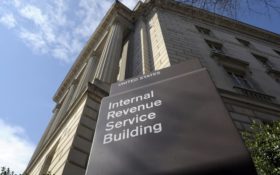 Americans are getting an extra day to file their taxes after key elements of the IRS website crashed on deadline day.

The IRS said that individuals or businesses with a filing or payment due Tuesday now have until midnight Wednesday to complete the task.

Earlier Tuesday, Americans who had waited until the final day to file online got an unwelcome surprise: The agency’s website for making payments and gaining access to other key services was down due to what Treasury Secretary Steven Mnuchin later described as a “high-volume technical issue.”

“This is the busiest tax day of the year, and the IRS apologizes for the inconvenience this system issue caused for taxpayers,” Acting IRS Commissioner David Kautter said in a statement. “The IRS appreciates everyone’s patience during this period. The extra time will help taxpayers affected by this situation.”

No additional paperwork is needed to get the one-day extension, the IRS said.

The IRS snafu also caused problems for popular third-party tax preparers such as Turbo Tax and H&R Block. Both said that they would hold on to customer tax returns and file after IRS system reopened.

The agency did not say how many people were affected by the outage. But last year, about 5 million tax returns were filed on the final day of the traditional tax season. Electronic filing is the most popular way to file in the US.

The IRS said that at this point, the problem appears to be a hardware issue. It provided no further details on the cause or severity of the problem.

Tax day fell on April 17 this year because April 15 was a Sunday and April 16 was Emancipation Day, a holiday in Washington, D.C.

Former IRS Commissioner John Koskinen warned last year of a possible system failure, due in part to underfunding of the agency. Among the areas that he said were underfunded were the agency’s aging information systems.

Democrats quickly blamed federal budget cuts to the IRS as part of the problem, and pushed to protect taxpayers from penalties.

“We know for certain the IRS’s lack of funding is compounding these kinds of problems,” said Sen. Ron Wyden Wyden of Oregon, the top Democrat on the Senate Finance Committee. “We don’t want taxpayers and middle-class folks and small businesses penalized. They didn’t do anything wrong.”

Republicans have targeted the agency for budget cuts since taking control of the House in 2011, relenting a bit this year to help the IRS implement last year’s overhaul of the tax code.

The IRS typically recommends that taxpayers use electronic filing to avoid common mistakes. Online filing is quicker than dropping something in the mail — when the site works, of course.