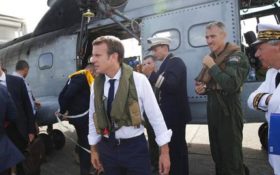 France’s president and the Dutch king visited Caribbean territories on Tuesday that have been hammered by Hurricane Irma, trying to quell accusations by residents that European governments were unprepared, slow to react and sometimes even racist in their responses to the devastation.

French President Emmanuel Macron flew into Guadeloupe and was heading to the hard-hit French-Dutch island of St. Martin to meet with residents. His plane brought water, food, tons of medicine and emergency equipment, doctors and recovery experts to an island demolished by the power of the Category 5 hurricane.

In a news conference in the Pointe-a-Pitre airport, Macron said the government’s “top priority” is to help island residents return to normal life.

“We have put in place one of the biggest air bridges since World War II” to bring emergency aid and rescuers to the islands of St. Martin and St. Barts, he said.

About 1,900 French police and troops are now on the ground to ensure security in St. Martin and power has been restored in about 50 percent of its homes, the French president said.

Residents on the island have spoken of hunger, homelessness, a lack of water and a feeling of abandonment after the hurricane pummeled the region on Wednesday. Some felt the French government spend more efforts rescuing white tourists than black or mixed-race islanders.

Macron said 2,000 people have already been evacuated from St. Martin’s French territory and new flights are going to be organized by the end of the week.

Irma left entire islands and tens of thousands of people in the Caribbean without water or electricity and reduced many homes to splinters. The French, British and Dutch governments sent warships, planes and security forces to keep order and deliver aid but some of that aid was slowed down further by Hurricane Jose, which passed north of the region over the weekend.

A medical center was being set up Tuesday in the stadium of Marigot, a port on St. Martin, and a French military ship will provide additional medical facilities in coming days, French Prime Minister Edouard Philippe said.

Dutch King Willem-Alexander arrived on St. Martin on Monday and said the scenes of devastation were the worst he has ever seen. The island is shared between a French territory and the former Dutch colony of St. Maarten, a largely autonomous part of the Dutch kingdom with a population of around 40,000.

Willem-Alexander said he was encouraged to see residents already working together to rebuild the shattered capital of Philipsburg.

“It’s been very useful to see for myself what terrible damage this storm has done and in this way to also show the population of St. Martin and the governor and prime minister that we stand together here as a kingdom and that we will solve this together,” he told reporters.

Willem-Alexander was flying Tuesday to the nearby Dutch islands of Saba and St. Eustatius, which also were hit by Irma but suffered less damage than St. Martin.

Meanwhile, British Foreign Secretary Boris Johnson will be visiting the British Virgin Islands and Anguilla to see the relief effort firsthand. He was expected to reach Barbados on Tuesday.

Johnson has defended the British government’s response amid claims it was slow to help the British overseas territories, saying there had been an “unprecedented” effort to deal with the aftermath of the storm. At least five people died in the British territories.

Dutch Foreign Minister Bert Koenders said he believes the European Union should send relief funds to both the French and the Dutch sides of St. Martin, and said he would also appeal to the United Nations to help the islands.

“Everybody should benefit from that money,” he told reporters after a Cabinet meeting called to discuss the fallout from Irma.