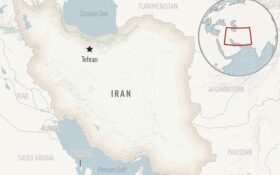 Workers at refineries crucial for Iran’s oil and natural gas production protested Monday over the death of a 22-year-old woman, online videos appeared to show, escalating the crisis faced by Tehran.

The demonstrations in Abadan and Asaluyeh mark the first time the unrest surrounding the death of Mahsa Amini threatened the industry crucial to the coffers of Iran’s long-sanctioned theocratic government.

While it remains unclear if other workers will follow, the protests come as demonstrations rage on in cities, towns and villages across Iran over the Sept. 16 death of Amini after her arrest by the country’s morality police in Tehran. Early on Monday, the sound of apparent gunshots and explosions echoed through the streets of a city in western Iran, while security forces reportedly killed one man in a nearby village, activists said.

Iran’s government insists Amini was not mistreated, but her family says her body showed bruises and other signs of beating. Subsequent videos have shown security forces beating and shoving female protesters, including women who have torn off their mandatory headscarf, or hijab.

From the capital, Tehran, and elsewhere, online videos have emerged despite authorities disrupting the internet. Videos on Monday showed university and high school students demonstrating and chanting, with some women and girls marching through the streets without headscarves as the protests continue into the fourth week. The demonstrations represent one of the biggest challenges to Iran’s theocracy since the 2009 Green Movement protests.

Online videos analyzed by The Associated Press showed dozens of workers gathered at the refineries in Asaluyeh, some 925 kilometers (575 miles) south of Tehran, on the Persian Gulf. The vast complex takes in natural gas from the massive offshore natural gas field that Iran shares with Qatar.

In one video, the gathered workers — some with their faces covered — chant “shameless” and “death to the dictator.” The chants have been features across protests dealing with Amini’s death.

“This is the bloody year Seyyed Ali will be overthrown,” the protesters chanted, refusing to use the title ayatollah to refer to Iran’s Supreme Leader Ali Khamenei. An ayatollah is a high-ranking Shiite cleric.

The details in the videos correspond with each and to known features of the facility compared against satellite photos taken Sunday.

Iran did not acknowledge any disruption at the facility, though the semiofficial Tasnim news agency described the incident as a salary dispute. Iran is one of the world’s top natural gas suppliers, just after the U.S. and Russia.

In Abadan, a city once home to the world’s largest oil refinery, videos also showed workers walking off the job. The New York-based Center for Human Rights in Iran cited a statement it said came from the Contractual Oil Workers Protest Organizing Council that called for a strike over “the suppression and killings.”

“We declare that now is the time for widespread protests and to prepare ourselves for nationwide and back-breaking strikes,” the statement said. “This is the beginning of the road and we will continue our protests together with the entire nation day after day.”

The violence early Monday in western Iran occurred in Sanandaj, the capital of Iran’s Kurdistan province, as well as in the village of Salas Babajani near the border with Iraq, according to a Kurdish group called the Hengaw Organization for Human Rights. Amini was Kurdish and her death has been felt particularly in Iran’s Kurdish region, where demonstrations began Sept. 17 at her funeral there.

Hengaw posted footage it described as smoke rising in one neighborhood in Sanandaj, with what sounded like rapid rifle fire echoing through the night sky. The shouts of people could be heard.

There was no immediate word if people had been hurt in the violence. Hengaw later posted a video online of what appeared to be collected shell casings from rifles and shotguns, as well as spent tear gas canisters.

Kousha also accused these unnamed groups that day of shooting a young man in the head and killing him — an attack that activists have roundly blamed on Iranian security forces. They say Iranian forces opened fire after the man honked his car horn at them. Honking has become one of the ways activists have been expressing civil disobedience — an action that has seen riot police in other videos smashing the windshields of passing vehicles.

In the village of Salas Babajani, some 100 kilometers (60 miles) southwest of Sanandaj, Iranian security forces repeatedly shot a 22-year-old man protesting there who later died of his wounds, Hengaw said. It said others had been wounded in the shooting.

It remains unclear how many people have been killed so far. State television last suggested at least 41 people had been killed in the demonstrations as of Sept. 24. There’s been no update from Iran’s government since.

An Oslo-based group, Iran Human Rights, estimates at least 185 people have been killed. This includes an estimated 90 people killed by security forces in the eastern Iranian city of Zahedan amid demonstrations against a police officer accused of rape in a separate case. Iranian authorities have described the Zahedan violence as involving unnamed separatists, without providing details or evidence.

Meanwhile, a prison riot has struck the city of Rasht, killing several inmates there, a prosecutor reportedly said. It wasn’t immediately clear if the riot at Lakan Prison was linked to the ongoing protests, though Rasht has seen heavy demonstrations in recent weeks since Amini’s death.

The semiofficial Mehr news agency quoted Gilan provincial prosecutor Mehdi Fallah Miri as saying, “some prisoners died because of their wounds as the electricity was cut (at the prison) because of the damage.” He also alleged prisoners refused to allow authorities access to those wounded.

Miri described the riot as breaking out in a wing of a prison housing death penalty inmates.