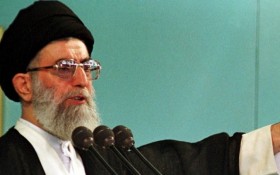 The House of Representatives passed the bill on Tuesday and it now goes to the Senate.

Without giving details, Rouhani said in a Wednesday cabinet meeting broadcast by state TV that Iran will “take any action that is necessary for the country’s expedience and interests” and show “reciprocal” reaction to the law.

The U.S. legislation would impose mandatory penalties on people involved in Iran’s ballistic missile program and anyone who does business with them. The measure would also apply terrorism sanctions to Iran’s prestigious Revolutionary Guard and enforce an arms embargo. Democrats said the new sanctions would not conflict with the landmark 2015 nuclear deal between Iran and world powers.

However, deputy foreign minister and senior Iranian negotiator Abbas Araghchi said Wednesday the bill could “affect successful implementation” of the agreement and reduce Iran’s benefits from it.

“We will reinforce our whole defensive weapons without paying attention to what others say,” he added.

Meanwhile, the head of a parliamentary committee on national security and foreign policy, Alaeddin Boroujerdi, said the committee will discuss the U.S. legislation on Saturday in an urgent meeting.