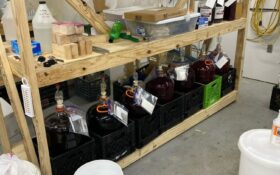 The report did not say how much wine was found in the incident Wednesday and if any suspects were arrested in the case.

The TV broadcast footage of police officers pumping out red wine from the well into a barrel, using a hose. The report said the incident happened in a village near the city of Khoramabad, some 380 kilometers (235 miles) southwest of the capital, Tehran.

Iranian police occasionally announce alcohol busts, though locally made bootleg vodka, other liquor and wines, as well as smuggled foreign brands are traded on the country’s black market.

Media outlets in this conservative nation, where alcoholic beverages are illegal and Muslims are banned from drinking alcohol, often carry reports about confiscations of bootleg booze.

In recent years, hundreds of Iranians have died from methanol poisoning after they drank toxic homemade brews. Methanol sometimes also contaminates traditionally fermented alcohol and is even sold, falsely advertised as drinkable.

With the outbreak of the coronavirus pandemic, which hit Iran the worst in the Middle East, scores died from ingesting industrial alcohol amid mistaken beliefs that it protects against the virus. The poisonings came as fake remedies spread across social media in Iran, where the coronavirus crisis overwhelmed the country.

A Muslim found drinking alcohol in Iran can be punished with 80 lashes and a cash fine. However, minority Christians, Jews and Zoroastrians are allowed to drink alcoholic beverages in private.