Iran alienates this nation after July cyberattack - The Horn News 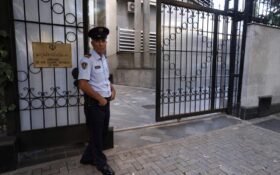 Albania cut diplomatic ties with Iran and expelled the country’s embassy staff over a major cyberattack nearly two months ago that was allegedly carried out by Tehran on Albanian government websites, the prime minister said Wednesday.

The move by NATO member Albania was the first known case of a country cutting diplomatic relations over a cyberattack.

The White House vowed unspecified retaliation Wednesday against Iran for what it called “a troubling precedent for cyberspace.”

In a statement, the White House said it has had experts on the ground for weeks helping Albania and had concluded Iran was behind the “reckless and irresponsible” attack and subsequent hack-and-leak operation.

The government’s decision was formally delivered to the Iranian Embassy in Tirana, the capital, in an official note, Prime Minister Edi Rama said. All embassy staff, including diplomatic and security personnel, were ordered to leave Albania within 24 hours.

Rama said an investigation determined that the cyberattack wasn’t carried out by individuals or independent groups, calling it “state aggression.”