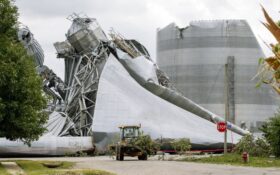 Farmers across a wide swath of Iowa are dealing with the heartbreaking aftermath of a rare wind storm that turned what was looking like a record corn crop into deep losses for many.

The storm, known as a derecho, slammed the Midwest with straight line winds of up to 100 miles per hour on Monday, gaining strength as it plowed through Iowa farm fields, flattening corn and bursting grain bins still filled with tens of millions of bushels of last year’s harvest.

“It’s a problem of two years of crops here. You’re still dealing with what you grew last fall and you’re trying to figure out how to prepare for what you’re growing this fall,” said Iowa State University agriculture economist Chad Hart.

Farms in Illinois and Indiana also reported crop and property damage, but not to the extent seen in Iowa.

Before the storm hit, the U.S. Department of Agriculture had been expecting a record national corn crop this year of 15.3 billion bushels harvested from about 84 million acres. Iowa was to provide about 18% of that production. Iowa’s crop was valued at about $9.81 billion in 2019.

The Iowa Corn Growers Association said it is too soon to accurately describe how much of this year’s crop was lost. Iowa Secretary of Agriculture Mike Naig said Tuesday that tens of millions of bushels of grain stored at farm cooperatives and privately on farms were damaged or destroyed.

Western Iowa has been declared an extreme drought zone and corn plants there were already weakened due to a lack of moisture. Those fields are likely a loss, Hart said.

According to a USDA report dated Aug. 1, farmers in much of central and eastern Iowa had been expecting near-record yields with healthy plants that could bounce back. For now, much depends on whether the plants snapped off or were just bent over by wind.

“There’s a lot more breakage or pinching of stalks than I thought there was now that I’ve been out and looked at more of it. That, of course, essentially has killed the plant,” said Meaghan Anderson, an Iowa State University extension agronomist who works with farmers in nine central Iowa counties.

Corn is flat on the ground in numerous fields in the region, Anderson said. The corn stalks had grown to full height and were in the final stages of producing ears and filling them out with kernels. Modern corn varieties can grow up to 8 feet tall making them vulnerable to powerful straight line winds.

For plants that were bent, and stalks not broken, there’s some hope, with a significantly reduced yield. But it will be difficult to harvest. If the stalks snapped, the plant will die. Those fields will be chopped and used as livestock feed.

“The main message out there to folks is this really comes at a time when farmers are already significantly hurting due to the pandemic and trade disputes,” he said.

“There’s a lot of stress in the countryside. … It was already very stressful,” Floss said. “This just adds insult to the injury that was already there.”

Crop insurance programs will help with corn in the field as will a USDA indemnity program. Federal disaster aid could be coming if a presidential disaster is declared.

Bins were full as farmers were hanging on to last fall’s crops in hopes of improved prices. The USDA estimates about about 2.8 billion bushels remain in storage.

“We carried more grain than usual through the springtime and here into the summer, and now the derecho got ahold of some of that grain and we’re going to end up losing a significant chunk of value because it became vulnerable to the weather,” Hart said.

There’s no federal program to help farmers who lost stored grain, he said. Some may have private insurance to help but most will likely wait to see if federal or state programs are initiated.