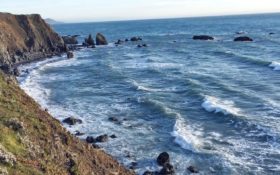 Another search for three children missing after their family’s SUV plunged off a Northern California cliff has turned up no sign of them. But authorities discovered a cell phone near the crash site that could have belonged to one of the family members.

Sarah and Jennifer Hart were found dead at March 26 along with three of their adopted children. The crash happened days after Washington state authorities began investigating the Harts for possible child neglect.

Dozens of people on Wednesday combed miles (kilometers) of coastline near the site.

KOIN reports the Mendocino County Sheriff’s office says a searcher found a cell phone that is being analyzed.

Authorities have said the crash was probably deliberate.