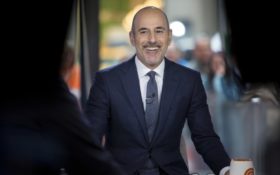 NBC News’ internal investigation following Matt Lauer’s firing says it doesn’t believe there is a culture of sexual harassment at the division and that current management wasn’t aware of Lauer’s behavior until the complaint that doomed him.

But the network says more needs to be done to ensure its more than 2,000 employees can complain about bad behavior and not fear retaliation. To that end, NBC News Chairman Andy Lack says employees will be able to discuss this with people outside the company.

“We cannot change the past,” Lack said. “What we can do is learn from it, and try to make it right.”

NBC Universal was criticized for turning to its general counsel, Kim Harris, to conduct the investigation and not allow outsiders to examine the culture. Harris’ report was primarily concerned with Lauer, and no specific complaints about others were discussed. There was no mention of a former NBC News employee’s accusation last month that former “Nightly News” anchor Tom Brokaw made unwanted advances on her, which he has denied.

NBC said the work of its all-female investigative team was reviewed and approved by two outside firms.

Lauer, the former “Today” show host, was fired in November after it was found he had an inappropriate sexual relationship with another NBC employee. Three additional women subsequently made complaints about Lauer.

Investigators found no evidence that anyone “in position of authority” at NBC News knew that Lauer had sexual relationships with others in the company until the Nov. 27 complaint by a woman about an affair that began at the 2014 Winter Olympics. Two of the four women who complained about Lauer said they believed someone in management knew.

The report said that Lauer, who is married, was flirtatious and engaged in sexual banter in the office. Several women said that he had complimented them on their appearance in a sexually suggestive way.

Investigators threw cold water on a published report that a button allowed Lauer to lock his office door without getting up from his desk. The button closed the door, but didn’t lock it, the report said.

Some of the 68 people interviewed said they were aware of other rumored extramarital affairs in the news division. Most were already known and dealt with; some are being looked into, the report said.

“The investigation team does not believe that there is a widespread or systemic pattern of behavior that violates company policy or a culture of harassment in the News Division,” Harris’ report said.