Inside woman's sadistic plot to kill judge - The Horn News 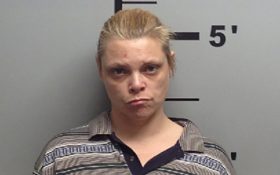 A northwestern Arkansas woman was sentenced to 40 years in prison for trying to hire a hit man to kill a judge and another man in exchange for thousands of dollars in electronics and art.

Jenkins admitted to asking a man to kill Judge Brad Karren and Jerry Ingram, a man who was facing drug charges, according to prosecutors. At the time, she did not know the man she solicited for the hit was an undercover sheriff’s detective.

On May 31, 2018, Jenkins asked another jail inmate, who was a confidential informant, if she knew anyone who would “take out a judge,” according to a probable cause affidavit. The informant introduced Jenkins to the detective, who was pretending to be the informant’s brother.

The informant and detective then met with Jenkins and Adan Taylor, Jenkins’ fiance, to talk about the hits. Authorities recorded the discussion.

Jenkins said she thought Karren had been unfair to her and she had a list of 15 people she wanted killed, according to the affidavit. The detective explained to her that it would be expensive, and Jenkins trimmed it down to two people — Karren and Ingram.

Jenkins asked the detective to kill Karren in exchange for a computer tablet, sound bar, and an original print photograph of Marilyn Monroe valued at $25,000, the affidavit states.

Jenkins insisted that her drug case had nothing to do with her efforts to hire a hit man, but Judge Green wasn’t having it.

“You understand it’s hard for us to believe that,” Green said, noting that Jenkins tried everything possible to get Karren killed and that it could have worked if she had managed to reach an actual assassin instead of a detective.

Cearley said Karren did not oppose the plea agreement. Green ordered Jenkins to not have any contact with Karren, his family, or Ingram.

Taylor was also arrested in connection with the plot, but his case has not been resolved.