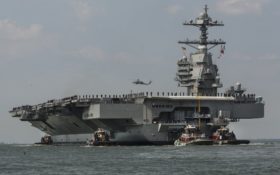 Toilets on two Virginia-based Navy aircraft carriers that have become repeatedly clogged could require treatments costing $400,000 each to get them working properly, a U.S. Government Accountability Office report found.

The USS Gerald R. Ford and USS George H.W. Bush were made with sewage systems similar to those used on commercial aircraft, but increased to accommodate more than 4,000 people, The Virginian-Pilot said, citing the report. But the pipes turned out to be too narrow to handle the volume of sailors flushing toilets at the same time, Shelby Oakley of the U.S. Government Accountability Office told the newspaper.

Navy maintenance crews determined both Norfolk-based aircraft carriers’ sewage systems could require costly acid flushes, potentially regularly, to fix the problem, according to the report. Officials said they did not know how many times the treatments would be needed.

The Accountability Office report, requested by the Senate Armed Services Committee, found 150 other examples of maintenance problems across ships in the Navy’s fleet that could require more than $130 billion in maintenance.

“Existing policies and guidance have not ensured that new ships are reliable and can be sustained as planned,” the newspaper quoted the report as saying.