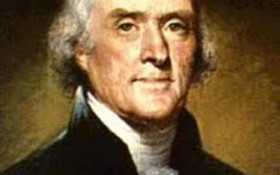 South Bend, Ind. Mayor Pete Buttegieg has introduced a brand new plan of his to rewrite American history — and he wants the founding fathers to be forgotten.

Buildings. Statues. Names of events — everything must go. The former president and author of the Declaration of Independence must be erased.

In fact, it’s already begun. Buttegieg plans to take Jefferson’s name off a Democratically-ran dinner in his hometown state of Indiana called the Jefferson-Jackson Dinner.

“There’s a lot, of course, to admire in his [Jefferson’s] thinking and his philosophy, but then again if you plunge into his writings, especially the notes on the state of Virginia, you know that he knew slavery was wrong.”

“Over time, you develop and evolve on the things you choose to honor … Jefferson is more problematic,” he said.

Former President Obama, now deemed too moderate for the incoming radicals, led a mass charge of deporting illegal immigrants at a higher number than even President Donald Trump.

Yet just earlier this month, Rodeo Road in Los Angeles was renamed to Obama Boulevard.

You can watch Buttegieg’s most recent appearance on Fox News below: