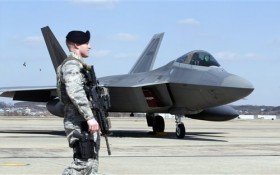 The U.S. Military is under constant assault, and not just from terrorists and foreign fighters in distant lands.

They’re coming under attack at home from politically correct leftists trying to force a liberal agenda on the proud men and woman who serve this country.

In the latest salvo, two extreme liberal groups joined forces to harass the Air Force into removing simple inspirational posters from Air Combat Command headquarters at Joint Base Langley-Eustis in Virginia, according to Military.com.

The Air Force initially defended the posters and refused to give into the P.C. bullies, saying the images with the faith-based messages had been in place for at least six years without complaint.

But after repeated complaints from the National Organization for Women and the Military Religious Freedom Foundation — two groups far out of step with mainstream America — the Air Force caved.

The posters came down last week, according to Air Force Times.

The two leftist groups complained the posters are offensive to women because of the general use of the word “man.”

But it’s not enough to attack “man.”

They’re also going after GOD, because the posters contain religious references that no court on the land would ever object to.

In fact, the phrases that use “God” and “man” on these posters come straight from an earlier edition of the official Air Force Manual!

One poster shows the Statue of Liberty. The other is a photo of the haunting twin beams of light that had been used to mark the site of the Twin Towers, before the new building was erected in that location.

Each poster contains a different quote from the 1955 edition of the Air Force Manual, which feature both general religious sentiments as well as references to “man.”

“What message does that send to young women who currently serve, or want to serve, in the military?” NOW President Terry O’Neill cried out in a hyperventilating complaint sent to the Air Force cited by The Virginian-Pilot newspaper. “What do you say to the women in your command who make the same sacrifices to protect their country as do men?”

But it’s pretty obvious the posters, which contain quotes from the 1955 Air Force Manual, use “man” in a way that refers to all mankind.

One of the quotes practically spells it out:

“The idea uppermost in the minds of the men who founded the United States was that each and every human being was important. They knew that the importance of man came from the very source of his life — because man was made in the image and likeness of God, he had a destiny to achieve.”

The first use of “men” of course refers to the Founders, who were indeed all male. But the same sentence makes it clear that the other references are about the importance of “each and every human being.”

Have you seen this yet? (weird Alzheimer’s-reversing “drink”) [sponsored]

Who could object to that?

The other poster said in part: “It is only a man of deep convictions, a man of deep faith, who will make the sacrifices needed to save his manhood.”

But the posters are gone, and the Air Force says they are going to be replaced “with something that reflects the diverse and inclusive force we are today.”

Maybe it will contain an anti-bullying sentiment.