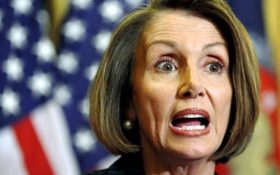 She’s so confident that Americans want MORE investigations and MORE obstructionism that she thinks she’s going to win the House again in 2020.

And she’s not going to wait for that pesky election before she declares victory.

“I intend to have this election won by this November,” she declared at an event with the elitist London School of Economics, The Hill reported.

“We want the message to be clear, we will retain the majority, we will grow the majority and will do so because our candidates are doing their constituent work,” she said. “We are, again, owning the ground, drilling down with our message, having the resources to win.”

At this point in the 2016 election cycle… just before mid-2015… Democrats held a whopping 10-point lead on what’s known as the “generic ballot.”

That’s when people aren’t asked about their specific districts or candidates. They’re simply asked: Are you voting for a Democrat or a Republican for Congress?

Despite that massive lead, Republicans emerged with an overwhelming 241-194 majority in the House the following year.

Oh, and that generic ballot?

At the presidential level, the numbers are much the same: When Trump first announced in June 2015, Hillary Clinton held a 20-point lead in the polls. By November, a year before the election, it narrowed to a still-healthy five-point lead for Clinton.

We all know what happened next.

Clinton seemed to think she had it won. She all but disappeared from the campaign trail at times – so frequently there were rumors of health issues (and in at least one very public incident, there was a health issue).

Yet she continued to think she had it in the bag, and arrogantly stopped campaigning in key states like Wisconsin and Michigan.

She was so confident that she would beat Trump that she planned an embarrassingly massive rally on election night with 10-inch aerial shells exploding over the Hudson River.

Then, less than 24 hours before Election Day – no doubt sensing a humiliating defeat – her campaign quietly canceled the fireworks.

Here in 2019, Pelosi hasn’t learned that lesson. She seems to be scheduling her own fireworks a year too early.

And in the height of hubris, she actually warned Republicans not to bother running – even darkly hinting at financial ruin if they dare to challenge her Democrats.

“So if you are Republican who might be thinking about running for Congress, you have to look at the strength of the person you want to unseat,” she said. “And if you’re a member of Congress, and you’re a Republican, and you’re deciding that you might be ready for retirement, you may have to remember that it’s going to cost you a lot of money to win or to lose. But if you win, you will be serving in the minority.”

She even took yet another potshot at a member of her own party: socialist media sensation Rep. Alexandria Ocasio-Cortez, D-N.Y.

“She’s a wonderful member of Congress — I think all of our colleagues will attest,” Pelosi began. Then, she stuck the knife in: “But those are districts that are solidly Democratic, this glass of water would win with a D next to it in those districts.”

It’s hard to tell who she’s insulting more: Ocasio-Cortez… or the people in the district who she thinks would vote for a “glass of water.”

So to recap: Pelosi is declaring victory more than a year before a single vote is cast… insulting her own candidates… threatening her rivals… then insulting her party’s loyal voters.

Sounds like a path to “victory” only a Democrat could create.