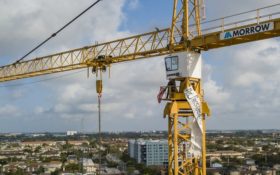 A man with a banner and an American flag climbed a construction crane near a Florida campus where President Donald Trump came to speak Monday about the political turmoil in Venezuela.

The man spent about two hours atop the crane at the edge of Florida International University’s campus in the Miami suburb of Sweetwater.

Sweetwater Police Chief Placido Diaz said the man forced his way onto the construction site and scaled the crane to make a political statement. He faces multiple charges, including trespassing.

WPLG-TV reports the man’s banner read, ”″Mr. Presidente, Please have mercy for E. Arocena.” The words “Cuban exile” were written at the top of the banner.

Eduardo Arocena was an anti-Castro activist sentenced in 1984 to life in prison plus 35 years for the murder of a Cuban diplomat and other bomb and weapons-related charges.