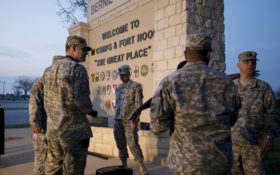 Radicals on the left have declared war on historic Confederate monuments. And while many Republicans disagree with their argument, at least there is some logic behind it.

These monuments are declaring slave owners as heroes, and obviously slavery was a disgraceful part of our history.

But the latest action by The Southern Poverty Law Center is undeniably absurd, because they are calling for the removal of Army bases that have no association with the confederacy at all!

The group declared three of America’s largest Army bases as Confederate monuments “with the potential to unleash more turmoil and bloodshed” if activists don’t “take down” the Army bases, according to The Daily Caller.

The bases they are arguing need to be taken down are Fort Hood in Texas, Fort Bragg in North Carolina, and Fort Benning in Georgia.

But that’s just the start of the idiocy.

The SPLC released a list of “1,500 confederate monuments” that they think encourage violence.

Their website stated, “More than 1,500 Confederate monuments stand in communities like Charlottesville with the potential to unleash more turmoil and bloodshed. It’s time to take them down.”

Elementary schools and even entire towns are included on their list of places they need to “take down.”

The SPLC has made it their latest mission to fight these monuments.

I have two words for them if they decide to “take down” these Army bases: Good luck.

They’re going to need it.