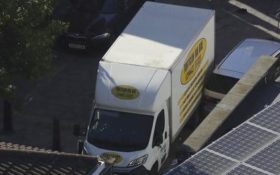 Authorities say three children have been rescued from the back of a U-Haul truck that was carrying drugs in Tennessee, and three North Carolinians have been charged in the case.

The Tennessee Highway Patrol told reporters Monday that a bystander in Cocke County called authorities last week to report seeing children being locked in the truck.

Trooper Owen Caudill pulled over the U-Haul and found a 1-year-old, 5-year-old and 8-year-old locked in the back. Temperatures hovered in the low 90s.

Authorities say troopers then noticed the smell of drugs coming from the vehicle. Authorities say a passenger surrendered some marijuana and an ensuing vehicle search uncovered crystal meth, cocaine and drug paraphernalia.

Eric Larue, Lakiza Williams, and Willie Green Jr. were all arrested on charges including child endangerment.