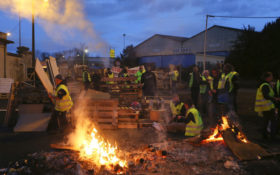 The “yellow vests” in France are worrying greens around the world.

The worst riots in Paris in decades were sparked by higher fuel taxes, and liberal French President Emmanuel Macron responded by scrapping them Wednesday. But the taxes are just what international climate negotiator say are needed to keep France in line with the controversial Paris Accords.

President Donald Trump withdrew the United States from those same Accords quickly after entering office. It seems the French people want their president to do the same.

“The events of the last few days in Paris have made me regard the challenges as even greater than I thought earlier,” said Stanford University environmental economist Lawrence Goulder, author of the book “Confronting the Climate Challenge.”

Economists, policymakers and politicians have long said the best way to fight climate change is to put a higher price on the fuels that are causing it — gasoline, diesel, coal and natural gas. Taxing fuels and electricity could help pay for the damage they cause, encourage people to use less, and make it easier for cleaner alternatives and fuel-saving technologies to compete.

These so-called carbon taxes are expected to be a major part of pushing the world to reduce carbon dioxide emissions and try to prevent runaway climate change that economists say would be far more expensive over the long term than paying more for energy in the short term.

But it’s not so easy for people that are struggling to just get by.

The resistance to the fuel tax is a personal blow to Macron, who sees himself as the guarantor of the 2015 Paris climate accord, its strongest defender on the global stage. He has positioned himself as the anti-Trump when it comes to climate issues.

The French government fears a Trump-led backlash against the accord could spread to other major economies whose commitment is essential to keeping the deal together.

The fuel tax was not originally Macron’s idea; it dates back to previous administrations. But he vigorously defended it and won the presidency in part on a promise to fight climate change.

So what went wrong?

Yale University economist William Nordhaus, who won this year’s Nobel prize for economics, said the tax was poorly designed and was delivered by the wrong person. “If you want to make energy taxes unpopular, step one is to be an unpopular leader,” he said. “Step two is to use gasoline taxes and call them carbon taxes. This is hard enough without adding poor design.”

Macron, like French presidents before him, made environmental and energy decisions without explaining it to the public. He’s also seen as the “president of the rich” — his first fiscal decision as president was scrapping a wealth tax. So hiking taxes on gasoline and diesel was seen as especially unfair to the working classes in the provinces who need cars to get to work and whose incomes have stagnated for years.

For many French, it was too much.

The French reaction to higher fuel prices is hardly unique, which highlights just how hard it can be to discourage fossil fuel consumption by making people pay more. In September, protests in India over high gasoline prices shut down schools and government offices. Protests erupted in Mexico in 2017 after government deregulation caused a spike in gasoline prices, and in Indonesia in 2013 when the government reduced fuel subsidies and prices rose.

“Higher taxes on fuel have always been a policy more popular among economists than among voters,” said Greg Mankiw, a Harvard economist and former adviser to President George W. Bush.

Even proponents of carbon taxes admit that they can disproportionally hurt low-income people. Energy costs make up a larger portion of their overall expenses, so a fuel price increase eats up more of their paycheck and leaves them with less to spend. And because energy costs are almost impossible to avoid, they feel trapped.

It is also not lost on them that it is the rich, unbothered by fuel taxes, who are hardest on the environment because they travel and consume more.

“The mistake of the Macron government was not to marry the increase in fuel taxes with other sufficiently compelling initiatives promising to enhance the welfare and incomes of the ‘yellow vests,’ said Barry Eichengreen, an economist at the University of California, Berkeley.

The protests, while sparked by fuel prices, are also about income inequality, populism and anti-elitism, experts say, not just about carbon taxes.