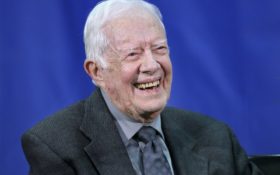 Jimmy Carter was one of the most liberal presidents in American history — but that’s not good enough for modern leftists. Now that Carter is laid up in surgery, Democrats have turned on him.

Left-wing activists kicked the 94-year-old former president while he’s down for thinking that humans are better than animals!

It all began Monday morning when Carter severely injured his hip while hunting.

“He is recovering comfortably from surgery to repair a broken hip at Phoebe Sumter Medical Center in Americus, Georgia. His surgeon stated that the surgery was successful. His wife, Rosalynn, is with him.”

The Center added that “President Carter said his main concern is that turkey season ends this week, and he has not reached his limit. He hopes the State of Georgia will allow him to rollover the unused limit to next year.”

Even though they don’t see eye-to-eye on much of anything, President Donald Trump sent a tweet to the former president —

Wishing former President Jimmy Carter a speedy recovery from his hip surgery earlier today. He was in such good spirits when we spoke last month – he will be fine!

It shouldn’t surprise anyone that the liberals ripped Trump apart over his tweet. But what WAS surprising is that they also raked Carter over the coals for not being liberal enough.

How could they have a problem with Jimmy Carter, the weak, sweater-wearing feminist who brought us gas lines, higher taxes, a stronger Soviet Union, and 444 days of the Ayatollah holding Americans hostage?

They thought it was terrible that Carter had gone hunting!

The president of the People for the Ethical Treatment of Animals (PETA), Ingrid Newkirk, said it’s “disappointing to learn that Mr. Carter—a Nobel Peace Prize laureate—spends some of his free time killing turkeys.”

After all, these animals “feel pain just as he does,” she said.

That’s right, it’s not enough to oppose separating make-believe “families” of illegal aliens at the border. Now, social justice warriors have to be against splitting up “animal families,” too.

And believe it or not, Newkirk wasn’t even done yet. She’s angry that Carter thinks human life is worth more than animals.

“PETA urges the former president to oppose speciesism, a human-supremacist worldview, and consider working to protect sentient beings, who simply want to be left in peace, rather than destroying them,” Newkirk told the Washington Free Beacon.

“Human-supremacist”?! At this rate, it won’t be long before the Democrats start denouncing people for washing their hands, because it kills innocent bacteria.

As it turns out, Jimmy Carter is a lifelong hunter. “Throughout my young life, I was obsessed with hunting,” he wrote in his book, An Hour Before Daylight.

He went home to hunt in the woods while he was president.

He even released a photo of himself teaching his young daughter, Amy, how to shoot a rifle.

He wrote that he currently owns “a handgun, four shotguns, and two rifles. I use them carefully, for harvesting game from our woods and fields and during an occasional foray to hunt with my family and friends.”

And he was inducted into the Georgia Hunting and Fishing Hall of Fame in 2016.

About a month ago, the owner of a Georgia farm posted a picture of him and Carter with a dead turkey and the message: “94 years old and still bustin’ beaks!”

But being a break-bustin’ hunter with eight guns doesn’t stop Carter from throwing his weight behind gun control when the Left asks him to.

He supported a weapons ban introduced by then-Rep. Chuck Schumer in 1994.

Carter still backs the gun-grabbers’ agenda and claims the NRA doesn’t represent “average hunters and people who use guns for their own defense.”

And Carter supports tearing up the Second Amendment even though he knows gun control laws don’t work!

Back in 1978, Carter shelled out huge money for a study into gun control legislation—and sociologists James Wright, Peter Rossi, and Kathleen Daly found they don’t help at all.

But none of that is enough for today’s liberals, who want the longest living president in history to apologize for his homo sapien privilege.

Carter isn’t our idea of a great president—or even a decent one— but we wish him a speedy recovery… and hope he bags lots of turkeys next year.