INSANE! Dem congressman attacks his OWN donor!? - The Horn News 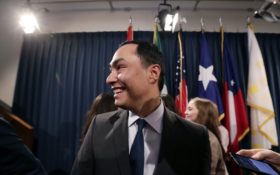 A Democratic lawmaker launched a desperate and ugly bid to win some much-needed attention.

And it backfired in spectacular fashion.

He’s not only being called out for the ugly stunt… he accidentally attacked one of his own donors!

Rep. Joaquin Castro (D-TX) created a shockingly tone-deaf list of private donors in his district who gave the maximum contribution to President Donald Trump, then circulated it on social media:

Sad to see so many San Antonians as 2019 maximum donors to Donald Trump — the owner of ⁦@BillMillerBarBQ⁩, owner of the ⁦@HistoricPearl, realtor Phyllis Browning, etc⁩.

Their contributions are fueling a campaign of hate that labels Hispanic immigrants as ‘invaders.’ pic.twitter.com/YT85IBF19u

Critics likened it to an enemies list… or even a hit list… and in any case, an unnecessary escalation in rhetoric at a time where heated language is leading to violence, and everyone is being urged to tone it down.

“Targeting and harassing Americans because of their political beliefs is shameful and dangerous,” said House Minority Leader Kevin McCarthy, R-Calif. “What happened to ‘when they go low, we go high?’”

“I don’t want to put these people’s names in my feed because this is dangerous, by any campaign,” Maggie Haberman of The New York Times wrote on Twitter.

But instead of apologizing, Castro doubled down, not only leaving the tweet online but also sharing messages of support from those on the fringe left who cheered the ugly move.

The president’s son likened it to a mass shooter’s “kill” list and said it could incite “fringe crazies” into violence.

“The fact that we’re making lists of our political enemies and trying to create that narrative is scary,” Donald Trump Jr., said on Fox News. “If someone on our campaign did that, it would be rough.”

One member of Congress knows too well exactly where this kind of rhetoric can lead.

“People should not be personally targeted for their political views. Period,” said House Minority Leader Steve Scalise, R-La., who survived a shooting in 2017 when a crazy leftist opened fire at a practice for a Congressional baseball game.

“This isn’t a game,” he said, according to The Daily Caller. “It’s dangerous, and lives are at stake. I know this firsthand.”

The list is all based on publicly available information as most donors are listed with the Federal Election Commission, and those names can be found in online databases.

However, it’s highly unusual for political figures to weaponize the donations of private individuals.

Certainly, in this case, any of those donors who live in Castro’s district are his own constituents – people he is supposed to represent in Congress, not harass for their views.

Some of them aren’t just his constituents. They’re also his own donors, as local businesspeople often contribute to both parties to ensure they have a voice no matter who is elected.

And one of those donors is putting Castro on notice.

Local real estate developer Wayne Harwell has given $1,000 to the Castro campaign in the past.

But that’s all over now. He’s voting with his wallet.

“If he dislikes me enough that he wants to put my name out there against Trump, I’m not going to give money to him,” Harwell told Fox News. “Obviously Castro feels pretty strongly against me.”

Castro isn’t just trying to win attention for himself (clearly by any means necessary) but also for his twin brother: Julián Castro, the former San Antonio mayor and Housing and Urban Development secretary under President Barack Obama.

If anything positive can be said of the donor stunt, it’s that it couldn’t possibly hurt that campaign. Castro has never topped 2 percent in any primary poll and has hit a statistical ZERO in several of them.