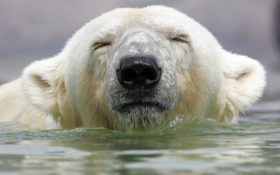 Lithuanian police say a private circus owner has released a bear from a cage after a standoff with police trying to take the animal away.

Authorities wanted the bear confiscated for many violations, most recently because it was kept in temperatures reaching 30 degrees Celsius (86 Fahrenheit), well above the authorized temperature of 22 degrees (72 Fahrenheit) for wild animals.