INSANE! Bernie Sanders' most WACKY promise (what!?) - The Horn News 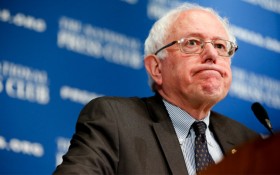 It seems that every day the 2020 Democratic presidential hopefuls come up with a new policy to destroy America — and Sen. Bernie Sanders, I.-V.T., just made the most insane promise yet.

They want to give 16-year-olds the vote.

They want to abolish ICE and tear down the few standing sections of the border wall.

They want to take your tax dollars and give them to people who are “unwilling to work” as part of a “Green New Deal.”

They want to make it legal for abortionists to kill newborn babies after they’ve been born safe, healthy, and able to live on their own.

And now they have a new brick to lay in the mausoleum they’re building for the Constitution: They want to give “free” health care to illegal aliens.

All in all, eight Democratic candidates for president have thrown their support behind ultra-leftist plans for taxpayers to foot the hospital bills of people who broke the law to come into our country.

Sanders started the ball rolling, saying that his national health care plan “would cover all residents” of the U.S.

Did you catch that? “Residents,” not all “citizens.” And he means just what he says.

You don’t have to read his mind — because we read his bill.

When the bill talks about who can cash in on his socialist “Medicare for All” plan, it never uses the word “U.S. citizen,” not a single time. Instead, the government has to legally guarantee that “every person in the United States has access to health care.”

Sanders told CBS that he will personally see to it that you pay up for “every man, woman and child in this country” — but he never says everyone in this country legally.

Two more—Mayor Pete Buttigieg and Andrew Yang—say they would let you pay for the sicknesses of illegals who are already in this country.

But if they’re elected, wouldn’t their promise that the government will pay your all your medical charges act like an enormous magnet to draw as many illegals into the country as possible before their inauguration?

We’re already on track to have a million illegals enter the country this year under the strictest border enforcement in generations!

Then there’s the cost. Medicare for All will cost taxpayers $32 trillion over 10 years—but it’s even worse than you think.

The group that did the study, the Mercatus Center, only figured on the plan covering “30 million uninsured Americans.”

But guess what? That doesn’t count illegal immigrants at all…not the ones we have, not the ones this outrageous handout will bring in by the millions.

Everyone says there are at least 11 million illegal aliens in the country…but they’ve said that for 10 or 15 years. Researchers from the Ivy League place that number at closer to 20, maybe even 30 million illegals in the U.S.…and climbing!

That means you can take the study’s estimate and double it. It won’t cost $32 trillion…it will cost $64 trillion, bare bones, just to cover everybody who’s “resident” in the country now!

That’s so irresponsible that it’s insane—but believe it or not, only two people running for president in the Democrat Party in 2020 say no…and they’re people you’ve never heard of: John Delaney, a former congressman from Maryland, and Wayne Messam, the mayor of Miramar, Florida.

This may be the craziest idea Democrats have gotten behind so far—and that’s saying a lot!

Promising free healthcare to anybody in the world who can crawl across the American border won’t just make us the sick tent of the world.

It won’t just attract AIDS patients, cancer victims, and people with the most exotic—and expensive—diseases to come in any way they can to get free coverage.

It will be the biggest transfusion in history, draining the wealth out of the middle class until they turn pale and die, and giving it people who don’t care enough about the flag to come into the United States legally.

But the people who care for the flag even less are the Democrats promising every disease-riddled person in the world the right to reach into your wallet.