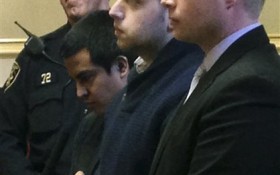 The man who authorities dubbed the “Bordeaux Bandit” for allegedly stealing expensive bottles of wine around the Northeast was sentenced to prison in Rhode Island on Wednesday for stealing video game equipment.

Scott Deluca, of Cohoes, New York, was sentenced in Providence to 90 days in prison for larceny, with credit for time served since Jan. 11. The remainder of his six-year sentence was suspended.

The 25-year-old is accused of stealing rare wines from businesses in Connecticut, New Jersey and New York. One bottle he allegedly took from a Connecticut restaurant is worth $4,800.

In Rhode Island, Deluca pleaded no contest to taking a Nintendo Wii, games, a controller and jewelry from a Cumberland apartment in 2011. A warrant was issued after he failed to appear in court in June 2014.

Deluca was ordered to pay $6,188 in restitution and have no contact with the victim. He answered questions from a magistrate judge, but did not say anything on his own behalf before the sentence was imposed.

Deluca was arrested Jan. 8 in Smithfield, where police learned during booking that police in Groton, Connecticut, had obtained an arrest warrant in the wine theft.

Groton police say Deluca stole a bottle of 1990 Chateau Petrus wine from the wine storage area at the Octagon restaurant at the Mystic Marriott Hotel.

Deluca’s lawyer, Thomas Thomasian, said he couldn’t comment on the other cases.

After serving his sentence in Rhode Island, Deluca faces a fugitive from justice charge and extradition, according to the attorney general’s office. The state withdrew a violation of bail charge as part of the plea agreement.