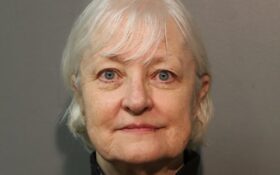 A woman with a history of stowing away on airliners was arrested Tuesday for attempting to sneak onto a flight at Chicago’s O’Hare International Airport, authorities said.

The arrest of Marilyn Hartman, 69, came two weeks after a judge rejected a plea deal that would have given her probation for a previous attempt to stowaway on a flight. Hartman is being held on a trespassing charge.

Hartman allegedly left the facility where she had been staying while on electronic monitoring. The device allowed Cook County sheriff’s deputies to track her as she headed for O’Hare. Deputies activated an alarm on Hartman’s device as she neared Terminal 1, where she was arrested.

Officials of the Cook County Sheriff’s Department say plans are to seek a felony escape charge for Hartman.

Hartman’s arrest comes two weeks after a court hearing in which Hartman’s attorneys and prosecutors said they reached the plea deal on a pending case that would have imposed 18 months of probation, plus court-ordered mental health treatment.

Formal plea proceedings had not begun, but Judge Peggy Chiampas put attorneys on notice that she was not inclined to agree to that sentence.

Hartman, was arrested at O’Hare in October 2019 just as she was trying to pass the second of two security checkpoints, according to court records. She was released from Cook County Jail about a year ago in an effort to release low-risk detainees from contracting COVID-19.

The 2019 arrest violated her probation sentence for sneaking past O’Hare security in January 2018, boarding a jet and flying to London’s Heathrow Airport without a ticket.