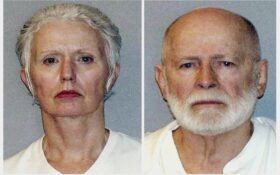 The longtime girlfriend of late Boston gangster James “Whitey” Bulger has completed her federal prison sentence and moved in with her twin sister.

Greig, 69, spent the last year of her sentence living under home confinement with Bulger’s relatives in the affluent Boston suburb of Hingham. She’s moving back to her hometown of South Boston.

Her sister, Margaret McCusker, said she is “thrilled” that her sister’s sentence is over.

Kevin Reddington, Greig’s attorney, told The Boston Globe that his client is “an incredible woman” and he was happy that she is now free. “I’m very happy things have gone full circle for her.”

Greig joined Bulger on the run in 1995 shortly after he fled Boston to evade a federal racketeering indictment. The couple was captured in 2011 in Santa Monica, California.

She was sentenced to eight years in prison for helping Bulger evade capture, and an additional 21 months for refusing to testify before grand juries.

Bulger was serving a life sentence for 11 murders when he was beaten to death by fellow inmates at a West Virginia prison in October 2018. He was 89.