India's minister takes a stand against Putin - The Horn News 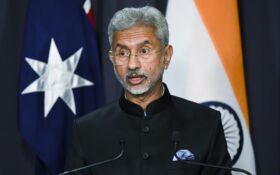 India’s External Affairs Minister Subrahmanyam Jaishankar said Russia’s war on Ukraine “does not serve the interests of anybody,” but declined to say whether his government would support a United Nations General Assembly motion condemning Moscow’s annexation of Ukrainian territories.

Jaishankar was speaking at a joint news conference Monday with Australian Foreign Minister Penny Wong after a bilateral meeting at Parliament House where the Ukraine war was discussed.

“We have been very clearly against the conflict in Ukraine. We believe that this conflict does not serve the interests of anybody. Neither the participants nor indeed of the international community,” Jaishankar said.

“As a country of the Global South, we have been seeing firsthand how much it has impacted low-income countries, the challenges that they are facing in terms of fuel and food and fertilizers,” he added.

Asked if India would support the U.N. motion this week condemning Moscow’s annexation of four Ukraine regions, Jaishankar replied: “As a matter of prudence and policy, we don’t predict our votes in advance.”

India is a major market for Russian-manufactured weapons.

“As Prime Minister Modi has told Mr. Putin, this is not the time for war,” Wong said.

One of the reasons India was so heavily reliant on Russian arms was that “for multiple decades Western countries did not supply weapons to India and in fact saw a military dictatorship next to us as the preferred partner,” Jaishankar said, referring to Pakistan.

The Australian and Indian ministers agreed that differences on Russia did not undermine the Quadrilateral Security Dialogue, a partnership also involving the United States and Japan better known as the Quad.

“I think the Quad is functioning extremely well,” Wong said. “I think the level of strategic trust and strategic consistency amongst Quad partners is deep and firm.”