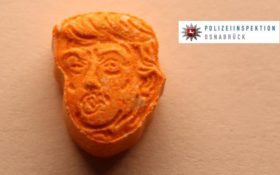 Some drug traffickers appear to be using President Donald Trump’s image to brand their illegal wares.

An Indiana State Police news release about 129 arrests in a series of drug busts in northern Indiana includes a photo of what police describe as “Trump-shaped ecstasy pills.”

They are orange and stamped with a face. On the back are the words “great again,” an apparent reference to Trump’s campaign slogan, “Make America Great Again.”

Traffickers sometimes produce uniquely shaped or colored drugs as a marketing technique to encourage buyers to return for more.

Friday’s release doesn’t provide details, including how many of the pills were seized.

The six-day operation in June involved traffic stops by state and city police, as well as sheriff’s departments. LSD, cocaine and other drugs were also seized.