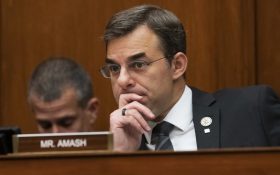 Michigan Rep. Justin Amash, a high-profile critic of President Donald Trump who quit the GOP and became an independent, announced Saturday he would not seek the Libertarian nomination for the White House, weeks after saying he was running because voters wanted an “alternative” to the two major parties.

In deciding to drop out, he cited the challenges of trying to campaign as a third-party candidate during the coronavirus pandemic.

“After much reflection, I’ve concluded that circumstances don’t lend themselves to my success as a candidate for president this year, and therefore I will not be a candidate,” he said in one in a series of tweets explaining his decision. He said “the new reality of social distancing levels the playing field among the candidates in many respects, but it also means lesser known candidates are more dependent on adequate media opportunities to reach people.”

Amash said he still thinks such a candidacy could prove successful in the future.

“I continue to believe that a candidate from outside the old parties, offering a vision of government grounded in liberty and equality, can break through in the right environment,” he tweeted. “But this environment presents extraordinary challenges.”

Amash would have faced nearly impossible odds of winning the presidency. But third-party campaigns can have unpredictable consequences for the Democratic and Republican candidates in the race.

In 2000, Ralph Nader’s Green Party presidential bid cost Democrat Al Gore crucial support and was a contributing factor in Republican George W. Bush’s narrow victory. Democrat Hillary Clinton’s 2016 loss to Trump has been blamed in part on the support that Green Party candidate Jill Stein picked up in states such as Pennsylvania.

In announcing his intention in late April to seek the Libertarian nomination, Amash said he wanted to represent the millions of Americans who do not feel well represented by either major party.