In Texas, the post-freeze work begins - The Horn News 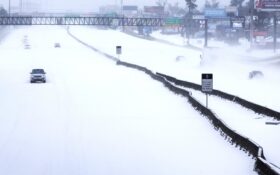 The seam that split in a pipe under Nora Espinoza’s sink during the frigid cold that gripped Texas was narrower than the edge of a dime.

Her kitchen appeared mostly undamaged, but the plumber that cut into Espinoza’s wall found water had been pouring in underneath the floor. She expects the repairs to cost $15,000.

Espinoza, a 56-year-old Dallas resident, is among those still getting a sense of the wreckage left by the icy blast that hit Texas and much of the Deep South last week, knocking out power to millions and contributing to nearly 80 deaths. Soaked drywall and carpet is being pulled back to give a fuller view of the destruction, and the political peril for elected leaders and energy officials who were unable to keep the heat on in places unaccustomed to freezing cold.

Roberto Valerio, a plumber in North Texas, said the broken pipes and other problems caused by the storm had led to “big chaos.”

“We can’t find what we need easily,” he said. “There’s a great shortage of supplies.”

In the Houston area, officials on Monday announced they have set up a relief fund to help cover the cost of repairs and temporary housing for vulnerable families. Gov. Greg Abbott has indicated his fiercely independent state needs help. His office encouraged out-of-state plumbers to come fix Texas pipes.

For Espinoza, who said her home dropped to 38 degrees Fahrenheit before the power was restored and the pipe burst Friday, it’s far too little, far too late

“Your job is to protect us. That’s why we voted you in,” Espinoza said of Abbott as she fought tears while waiting for a plumber. “My pipes would have never burst, never, if I had power.”

A rushing sound could be heard in Espinoza’s kitchen Saturday night, when Valerio turned the water back on. He made temporary repairs, but it’ll be weeks before he can come back to do more work and determine whether the floor needs to be replaced.

Espinoza fears the spread of mold may do more damage in that time and is unsure what her insurance will cover. But she is nonetheless grateful: She can take hot showers and her small dogs have emerged from the pile of blankets where they spent last week’s days of frigid cold.

“I do consider myself to be very lucky,” she said Monday.

The Federal Emergency Management Agency has delivered more than 1 million meals to Texas, the Defense Department has delivered more than 4 million liters of water and it continues to deliver water in bulk to multiple locations in the state, White House press secretary Jen Psaki said Monday. The federal government also delivered dozens of emergency generators and more than 120,000 blankets to Texans over the weekend.

Tens of thousands of people in Mississippi and Louisiana also still lacked water or had very low water pressure Monday, even with weather warming up days after a winter storm.

Harris County Judge Lina Hidalgo said about $2.25 million has so far been raised to help pay for repairs and housing for Houston-area families who lack insurance or who don’t qualify for federal assistance. That includes a $1 million donation from the foundation of CenterPoint Energy, the utility that provides electricity for the Houston area, she said.

Houston Mayor Sylvester Turner asked area residents with the means to donate to the fund.

“Many families through no fault of their own have homes that are uninhabitable because their pipes froze during the arctic blast,” said Turner.