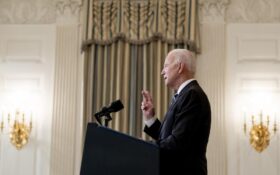 President Joe Biden’s handling of the impending global oil crisis has come under fire… and not by just Republicans.

Biden announced on Tuesday that the United States was putting an embargo on Russian oil imports in response to Russian dictator Vladimir Putin’s bloody and unprovoked invasion of Ukraine.

I appreciate President Biden working with our bipartisan coalition to ban imports of Russian oil and gas. This will weaken Putin's regime.

Now we've got to increase domestic production and strengthen our energy independence so we can get working families some relief at the pump.

He condemned the reliance on foreign energy, specifically condemning reports that the White House had reached out to Venezuelan communist dictator Nicolas Maduro about reversing sanctions put in place by former President Donald Trump.

“We shouldn’t be advancing other countries who don’t share our values,” Tester told CNN’s Manu Raju. “So I think the opportunity here is to do it domestically, create jobs here, deal with it domestically, and also see if we can help Europe out too.”

The United States should “basically go back to the policies that we’ve had before,” Manchin said. “We have to do our leasing in the Gulf [of Mexico], ok, lands [that the Bureau of Land Management have made] off-target, all this has to go back in, into production.”

“That’s all we’re asking for,” Manchin added. “And if we’re asking the rest of the world to step up, let’s show that we’re going to step up. And any oil that’s needed to our allies around the world, we produce it cleaner than anybody.”

Manchin didn’t just use his words to pressure the Biden administration to expand domestic energy production.

In a stunning move, the Democratic centrist delayed his vote on the nomination of key Biden Interior Department nominee Laura Daniel-Davis this week. His office cited the ongoing energy crisis caused by the Ukraine war and inflation as the reason.

“As we continue to watch energy being used as a weapon of war by Vladimir Putin, the need for increased American energy production is clear to ensure domestic supplies and help our allies,” Manchin’s spokesman told The Hill.

“Ms. Daniel-Davis has been nominated to serve in a role that would oversee the federal leasing programs, and Senator Manchin would like to see more from the Department that it intends to get back to the business of leasing and production on federal lands and waters in a robust and responsible way.”

When asked about his role in the rising gas prices, Biden blamed Russia — not his administration’s decisions, such as the banning of the Keystone XL pipeline.

“They’re going to go up,” the president said. “Can’t do much right now. Russia is responsible.”

[READ MORE] Jen Psaki goes on an energy tirade (did you see this?)