In New Jersey, THIS button will appear in all hotel rooms - The Horn News 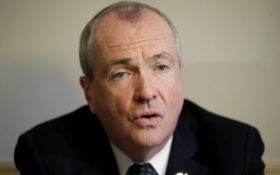 New Jersey Gov. Phil Murphy signed a bill Tuesday that he and others said is the nation’s first requiring most hotels to provide their workers with panic buttons they can press to summon help quickly in an emergency.

The Democratic governor and several nationwide unions said New Jersey is the first state to mandate the devices, although similar measures are under consideration in Illinois, Florida and Washington state. And some hotel chains including Marriot and Hilton have announced plans to provide the devices to their workers without being forced to by government.

“I am proud to sign panic button legislation to give hotel workers security and the ability to immediately call for help should they need it,” Murphy said as he signed the bill, surrounded by one housekeeper from each of the nine Atlantic City casinos.

The law takes effect in January and applies to hotels with 100 or more rooms.

In 2018, a 51-year-old room cleaner at Bally’s casino was pushed into a room by a man who then sexually assaulted her.

“The housekeepers were enraged after that,” said Ben Albert, an official with Local 54 of the Unite-Here union.

Several housekeepers interviewed after the signing said they have had instances in which they felt unsafe on the job.

“If you think something is wrong, you can push this and help will come,” said Daksha Parikh, a housekeeper at the Tropicana casino. “It’s a layer of protection for us. Sometimes it’s a long floor of rooms and you may be the only one working there.”

“Sometimes they don’t have any clothes on when you knock on the door and say, ‘Housekeeping,’ or they’re playing dirty videos on their laptop,” she said.

Iris Sanchez, a housekeeper at Caesars, said she opened the door to a room one day only to have two dogs come charging out at her. She’s relieved she will be able to summon help at the touch of a button. The devices would automatically contact building security.

“Today the lawmakers in New Jersey stood up with my co-workers and I to say no more to guests exposing themselves to us, soliciting us for sex, and allowing us to be unsafe as we open the door to a guest room, with no idea what is waiting for us behind it,” she said. “It’s great knowing I’ll be able to come home safe at the end of my shift. I can do my job without being worried.”

“Our country has been preoccupied with millionaire entertainers being sexually harassed by billionaire owners, but what is being lost in all this are the working women who are far more likely to face this kind of behavior at their jobs,” he said.