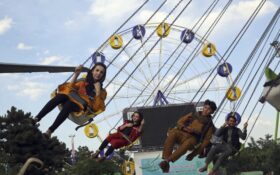 When the bowling alley reopened, Zohal Bayat was eager to get back to the lanes. For four long months amid Afghanistan’s coronavirus, it and other recreational facilities had been closed. So that meant Bayat, a member of the country’s national women’s bowling team, had been unable to practice,

On top of that, Bayat was at one point struck with COVID-19, the illness caused by the virus. She spent more than 20 days in isolation, with fever, shortness of breath and coughing. Her father was infected as well, but now both are well.

“I am so excited,” the 25-year-old Bayat said, as she practiced at the Friend’s Café, her favorite alley.

Still, she only comes on weekdays. Weekends are too crowded, as young people pack the place, which also features pool tables, music and the café itself. “I will continue to exercise,” said Bayat, who also plays basketball. “But I am afraid of the second wave of the virus.”

Desperate for relief from endless war combined with the pandemic, Afghans are rushing back to public recreation as the government eases the lockdown it imposed to fight the coronavirus. Since mid-July, Afghans can once again frequent parks, swimming pools and gyms, shop in malls and celebrate marriages in wedding halls. Universities and private schools have reopened, and at government schools, the 11th and 12th grades have restarted.

Few wear masks or take other precaution — and authorities are left trying to remind the public of the danger of a second wave of the pandemic.

So far, the official figures have not shown new cases spiking since the easing of the lockdown, with a steady average of around 50 to 70 a day the past month. According to Health Ministry figures, Afghanistan has recorded over 38,200 cases of the virus so far, including 1,409 deaths.

But the real numbers are likely far higher, and the depth of the tragedy is far greater than people understand, said Mohammad Yaqoub Haidari, the provincial governor for the capital Kabul and head of the committee to fight COVID-19.

He told The Associated Press that in Kabul alone, close to 8,000 people have died due to the virus. At the peak, his teams were dealing with 200 to 700 deaths per day, especially during the months of May and June, and dozens of new graveyards have been made to take in the increased dead, he said.

There is no doubt the virus is still circulating. Haidari estimated that 53% of the capital’s population of more than 4 million people have been infected.

Afghanistan’s fractured health care system makes the virus even more difficult to control. More than 2,700 medical workers, including 40 at the Afghan-Japan hospital, one of two hospitals in Kabul that handle virus patients, have contracted the virus, according to the Health Ministry. The ministry said 72 health care workers have died across the country.

Still, after months of lockdown, Kabul’s residents have been relieved to finally get out. Thousands have been going to the capital’s City Park, where the amusement park has reopened as well. The park restaurant is built out of an old passenger jet, and children rush excitedly to sit in the plane seats inside.

Obaidullah Rasouly came on a recent weekend with his two kids, his first outing to the park in months. He was happy to be there — but also worried. He wore a mask while few others in the crowded park did.

“Unfortunately, our country did not implement the lockdown effectively, and now that it has been lifted, people are failing to take the appropriate precautions.” The 30-year-old said as his children played on the slides.

It’s good to finally give people freedom of movement, he said. “but they should use protective kits, or at least wear masks.”

At the amusement park, with its Ferris wheel and bumper cars, workers clean the machines three to five times a day, its director Habibullah Esmati said. Attendance is down from before the pandemic, both because of coronavirus worries and the security situation, he said.

He sees the reopening as a way to ease people’s stress from the outbreak. “If we can provide a place for entertainment, that is a help to people,” he said.

But what many Afghans have looked forward the most to reopening are wedding halls. Marriages were virtually put on hold during the lockdown because wedding parties — whether at halls or at home — were banned.

That pent-up demand means reopened wedding halls are now fully booked every night. That means gatherings that can pack with thousands of people into a hall, presenting a significant risk of transmission of the virus.

Mohammad Nader Qarghayi, director of the Kabul Wedding Halls Association, insisted that halls will reclose voluntarily if there are signs of a new spike in cases. “This is our country; we live here, and we service the people. The lives of our people are so much more important than our business,” he said.

Still, at the other Cafés and blowing centers, university students who had come to bowl had mixed feelings. Several said they were happy to have the chance to relax once more.

But if a second wave strikes, said 20-year-old Ahmad Sohail, “reopening of recreational places, given the circumstances, could be very dangerous.”