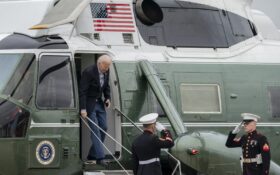 The word “impeachment” tends to conjure images of the Watergate scandal, but the House of Representatives has impeached federal officeholders of all stripes in the past: a senator, a Cabinet secretary, and 15 federal judges.

On Wednesday, one member of President Joe Biden’s Cabinet faced accusations of defaming his subordinates… and now he’s staring down impeachment.

“We know that those images painfully conjured up the worst elements of our nation’s ongoing battle against systemic racism,” Mayorkas said in the Senate hearing. He was presumably referring to the old practice of whipping slaves.

However, the photographer denied seeing any whips or whipping by any U.S. border agents. The photographer had been pressing mainstream reporters about correcting the narrative and putting the photos in proper context.

According to a bombshell report by Fox News, Mayorkas had received an email about the photographer’s remarks… two hours before that Senate hearing.

Yet the Homeland Security secretary pushed the fake whipping narrative on his own border patrol agents in public.

Now he’s facing calls to resign… or face impeachment in the event of a Republican-controlled House.

Mark Morgan, former acting commissioner of Customs and Border Protection, addressed the possibility of impeachment during a Thursday appearance on Newsmax.

Morgan addressed the possibility of impeachment, but he also acknowledged the problem of inertia.

“You’ve got representatives like Chip Roy [R-Texas] and Andy Biggs [R-Ariz.] and others that absolutely see this man for what he is… This man is a scumbag.”

“I think in the history of this country, the last Cabinet-level official that was impeached was in 1876,” Morgan said, referring to the 1876 impeachment of War Secretary William W. Belknamp.

“No Cabinet-level official in modern-day history has been impeached, and so I’m concerned that the Republicans are going to be a little bit hesitant to do that.”

“Mayorkas knowingly sold out the honorable men a women of Border Patrol… all to curry favor with the Biden White House,” Cruz argued in a tweet on Wednesday.

Disgraceful. Mayorkas knowingly sold out the honorable men a women of Border Patrol… all to curry favor with the Biden White House.