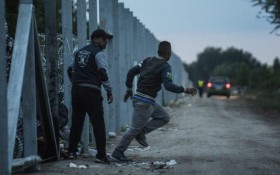 It’s the border crisis the left DOESN’T want to talk about.

Innocent children… being ripped from their families… and then forced to live with complete strangers.

A shocking new report out of Tijuana – confirmed by the San Diego Union Tribune – finds children are being bought, sold and in some causes outright stolen from their mothers.

Then, they’re being used to help illegals sneak across the border.

Border officials see a “family” and release them into the United States under what is known as the Flores agreement – but the new report finds that in at least some cases, the entire family is one big fake.

These kids aren’t being released into the United States to live with family.

They’ve already been taken from their real families – and likely can’t say a word about it, and if they do, they and their families back home face unthinkable violence.

The left has dismissed this as a wild conspiracy theory.

“Cases of fake families are cropping up everywhere and children are being used as pawns,” she told the House Homeland Security Committee. “In fact, we have even uncovered child recycling rings, a process in which innocent children are used multiple times to help migrants gain illegal entry.”

She made similar comments on Fox News:

“We’ve broken up child recycling rings — if you can believe it — in the last couple of months, which is where smugglers pick up a child, they give it to adults to present themselves as a family once they get over — because, as you know, we can only hold families for 20 days — they send the child back and bring the child back with another family. Another fake family.”

Instead of taking action, both Democrats and media dismissed it.

Buzzfeed News ran with the headline: “The Homeland Security Chief Says, Without Evidence, Children Are Being Recycled At The Border.”

Now, as a result, the problem is getting much worse – and a report out of Tijuana finds mothers in shelters there are living in fear that their kids will be snatched up and taken away.

One mother at a shelter there told the Union-Tribune she can’t go out and look for a job given the risk that her two sons won’t be there when she returns.

“They want to rob our kids so they can cross into the United States,” Antonia Portillo Cruz, a 44-year-old Honduran migrant, told the newspaper.

She said she’s seen men trying to buy children from women in the shelter, offering 7,000 pesos per child, or about $350, per child.

Pastor Gustavo Banda, a Tijuana shelter director, told the Union-Tribune confirmed the woman’s account, saying the mothers in his care are terrified.

“The mothers are very scared for their safety and for the safety of their children,” he said.

Even the children themselves are frightened.

“It’s horrific,” a teenager who wouldn’t give her name told the newspaper. “I could not even imagine the horror before I came here. I just wonder what happens to the kids once they make it across.”

The Trump administration has proposed DNA testing families at the border to ensure they are who they say they are.

But the left has even resisted that!

One expert told Time magazine last year that indigenous peoples might have “beliefs” against DNA testing. Another told KQED in San Francisco that it would be a violation of privacy rights.

But what about the rights of the children being exploited?

So far, Democrats have been silent on the matter, choosing grandstanding outside borders facilities over taking real action to protect at-risk kids.