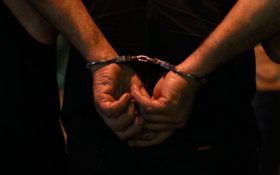 A member of a fishing boat crew was arrested and charged with killing one fellow crew member and attacking two others while aboard a fishing boat about 55 miles off Nantucket, Massachusetts.

Franklin Freddy Meave Vazquez, a 27-year-old illegal immigrant from Mexico, was charged with murder and attempted murder in connection with the bloody attack Sunday on the Virginia-based fishing vessel and will appear in court at a later day, the U.S. attorney’s office for Boston said in a statement.

According to an affidavit filed by a special agent in the U.S. Coast Guard, Vazquez attacked his fellow crew members with a knife in one hand and a hammer in the other for unexplained reasons.

The fishing vessel was carrying seven crew members and according to one of them, he heard yelling coming from one end up the boat and when he went to investigate, Vazquez struck him in the back of the head three times.

The crew member also stated that another victim was lying on the deck of the boat with blood coming out of his mouth.

When other crewmen attempted to capture Vazquez, he reportedly climbed up the ship’s mast to escape. Authorities still are unsure what sparked the attacks.

The captain of the seven-member crew placed a call on the distress channel, and the German cruise ship, Mein Schiff 6, responded, taking two of the injured fishermen on board, prosecutors said. The ship’s doctor pronounced one of them dead.

“They bring back two persons, one was sitting and bleeding at the head… very, very strong, and everywhere was blood, all over the face, and one person was lying there, and I don’t know what happened to him,” said Alex Goebbel, a witness aboard the German ship.

Court documents indicate that Vazquez is a Mexican citizen and had been living in the U.S. illegally. He had been arrested in March in Newport News, Virginia, on an abduction charge.

On April 2 he was placed in immigration proceedings, and was later released from custody.