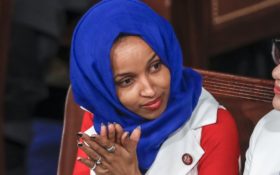 In a perfect world, the goal for any American politician would be to bring people together.

For modern Democrats, it seems as though their goal is to try spreading division — not unity.

Rep. Ilhan Omar, D-M.N., made this perfectly clear when she told a group of high school students about a heartbreaking scene of income and racial inequality she once witnessed five years ago.

But there’s one problem: She lied about it.

And it wasn’t even a good lie — she based the story on a well-known French story.

Omar told students at Richfield High School that she witnessed an old African-American woman forced into jail for stealing a $2 loaf of bread for her 5-year-old granddaughter. She went on to explain to the students that the poor, suffering woman was unable to pay an $80 fine –claimed she broke down into a fit of rage because of the inhumanity of the situation.

“I couldn’t control my emotions,” Omar told students, “because I couldn’t understand how a roomful of educated adults could do something so unjust.”

But The Washington Post debunked the story — and pointed out Omar was stealing the plot of Victory Hugo’s famous 1862 novel, “Les Miserables.”

“Omar’s story echoed the plot of ‘Les Miserables.’ If true, it is also probably embellished,” the newspaper wrote. “City officials said that police aren’t allowed to arrest people for shoplifting unless there’s a likelihood of violence or further crime. Typically, shoplifters are sentenced to attend a three-hour class.”

This isn’t the first divisive move Omar has made this week.

She’s also going after leaders in her own parties.

After being criticized by House Speaker Nancy Pelosi, D-Calif., last week, Omar fired back at the rank and file Democratic leader in a tweet.

“Patetico!  You know they’re just salty about WHO is wielding the power to shift ‘public sentiment’ these days, sis,” Omar tweeted. “Sorry, not sorry.”

You know they’re just salty about WHO is wielding the power to shift “public sentiment” these days, sis.

Perhaps Omar will tell us next about how she’s not sorry for her time spent on the barricades in Paris?