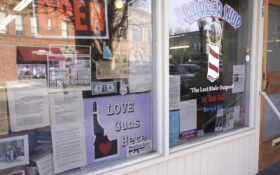 Linda Navarre moved to Sandpoint, Idaho, from Cleveland in 1978, when the town consisted of people in the timber industry and hippies “and they all got along.”

Now she barely recognizes the small resort community near the Canadian border that is quickly growing as people disenchanted with big city life move there. Many are conservatives fed up with liberal politics in blue states.

“The division gets wider and wider,” Navarre said, adding many of the new arrivals are changing the civility of the community. “My concern is there are so many people who are not nice.”

Sandpoint is a four-season resort town built along the shores of scenic Lake Pend Oreille. It had 7,300 residents in the 2010 Census, but grew 21% in the decade to about 8,900 in the 2020 Census. In addition to the natural beauty, “people come here because it’s a red state,” said longtime resident Gail Cameron, 67.

To capitalize on that trend, a growing number of real estate companies are advertising themselves to people on the right, saying they can take them out of liberal bastions like Seattle and San Francisco and find them homes in places like rural Idaho.

Sandpoint-based Flee The City is a consortium of four businesses which specialize in selling property to conservatives in northern Idaho and western Montana. The company calls itself “a real estate firm for the vigilant.”

Flee the City has partnered with a company that provides “sustainable homes design with integrated ballistic and defensive capabilities.”

Todd Savage, whose Black Rifle Real Estate firm is part of Flee The City, said in a brief email exchange that his business is booming, thanks to “insane” left wing politics.

One of the bigger players among right-leaning real estate companies is Conservative Move, based in a suburb of Dallas. Founder and chief executive Paul Chabot said blue states have only themselves to blame for driving out conservatives.

Idaho has been the fastest growing state in the nation for five years running, growing 2.9% in 2021, mostly from in-migration.

But the influx of people to places like Idaho has made it harder for some long-time residents. People struggle to find housing in Sandpoint, with many houses sold the same day they are listed, after bidding wars, Cameron said.

Many of those homes are converted into vacation rentals, which tightens the market for people who live in the area, Cameron said.

Carolyn Knaack, associate director of the Lake Pend Oreille Waterkeeper conservation group, has lived in town for a year.

She said the confluence of the coronavirus pandemic and politics “has created a divisiveness among folks.”

“I’ve been applauded and belittled for wearing a mask,” she said. “I have friends who refused to get vaxxed.”

Savage was asked if it was desirable for people to segregate themselves by political ideology.

“I don’t agree with the term ‘segregate,’” he wrote. “Folks simply ‘vote with their feet’ relating to issues such as crime, taxes, homeschooling, gun laws, mask and vaccine mandates, Orwellian laws and out of control tyranny in the sanctuary states.”

Not everyone is a fan of what Savage and conservative realtors are doing in Sandpoint and elsewhere.

Mayor Shelby Rognstad, a Democrat, worries real estate firms that serve only conservatives “pushes Idaho more and more into a playground for extremism.

“It doesn’t bode well for our sense of community here,” said Rognstad, who is mounting a campaign for governor. “It’s a challenge to civility.”

Bonners Ferry feels like it’s been overrun with white nationalists, said Russell, who owns a dance studio in the town of 2,600 residents.

“What they are doing is preparing for war,” Russell said of new arrivals, who often carry guns when in town.

“New people are moving in and they go to City Council meetings and tell people who grew up here to go back to California,” Russell said. “They are selling fear is what they are doing.”

The National Association of Realtors does not keep records of if any of its members market themselves by political ideology, spokesman Quintin Simmons said. And not all real estate agents are members of the Realtors. So it’s tough to determine if the trend of targeting conservative customers is widespread.

Indeed, in past decades a variety of extremist groups, most prominently the Aryan Nations, sought to create a white homeland in northern Idaho because of the region’s small number of minorities.

“People in the United States relocate all the time,” Bitz said. “What concerns us is when white nationalists and anti-democracy actors relocate to the region with the aim of organizing, recruiting and seizing control of local institutions.”