Iconic woman who drove around the world dies - The Horn News 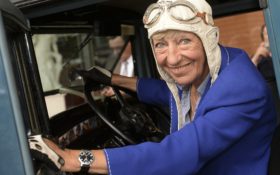 Heidi Hetzer, a Berlin businesswoman whose late-in-life decision to drive around the world in an American vintage car won her many fans back home in Germany, has died. She was 81.

Hetzer’s family said Tuesday she died at her home in the German capital over the weekend; the cause of death is unclear.

A trained mechanic who once lost a finger repairing an engine, Hetzer took over the family car business in 1969, turning it into one of Berlin’s biggest.

Having taking part in various car rallies for decades and driven from Germany to China in 2007, Hetzer decided to take her 1930s Hudson Greater Eight on a world tour in 2014.

Hetzer, who documented her journey on Instagram, received a hero’s welcome on her return to Berlin in 2017.