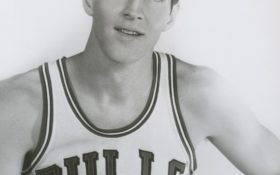 The former legendary head coach of the Utah Jazz and NBA Hall of Famer Jerry Sloan, 77, is dying.

According to The Salt Lake Tribune, Sloan’s condition is rapidly worsening and it’s feared he doesn’t have long to live. Sloan reportedly suffers from dementia and Parkinson’s disease.

“It’s basically a slide into oblivion,” columnist Gordon Monson writes. “He’s frail. He’s physically and mentally limited. Around the clock care is required for him. Although in the more recent past the old coach has been able to attend Jazz games, he will go no more.”

Monson is reporting that a member of his family accept that the long-time coach to be in poor health.

“He is dying,” the family member said.

Sloan has been a member of the NBA family for decades. Beginning as a player with the Baltimore Bullets in the 1960s, he transitioned to assistant coaching over time and eventually landed the head coaching gig with the Jazz in the 1988-89 season.

During his tenure in Utah he came close to achieving NBA glory twice, but couldn’t overcome the Michael Jordan-led Chicago Bulls in back to back years.

He first disclosed his condition with the Salt Lake Tribune in 2016.