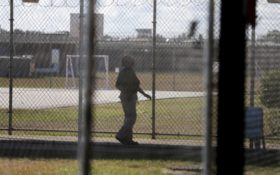 U.S. Immigration and Customs Enforcement said officers inside one of its Louisiana jails pepper-sprayed illegal immigrants to end their protest over prolonged detention.

Spokesman Bryan Cox said Wednesday that “a brief, calculated use of pepper spray was employed” during a Tuesday protest at the Winn Correctional Center in rural Winnfield. Cox said about 50 migrants were pepper-sprayed and the protesters “subsequently became compliant.” Cox said medical staff evaluated anyone who came into contact with the pepper spray and no injuries were reported.

Family members of people detained at Winn said some illegal immigrants had refused to go back to their cell and were sleeping outside. Others had written the word “Libertad” — Spanish for ‘liberty’— on bedsheets and towels.

Lawyers say asylum seekers have staged protests at other ICE jails in Louisiana, where the illegal immigrant detainee population has surged in recent months and hit 8,000 earlier this year. Asylum seekers from various countries say they’re being detained for months without a court date or a chance to request their release even after passing an initial screening to determine whether they have a viable asylum claim.

A federal judge in September sided with the Southern Poverty Law Center, which sued on behalf of asylum seekers detained in Louisiana, Alabama and Mississippi, and ordered ICE to follow its own guidelines in releasing detainees.

Both Winn and Richwood are operated by the same Louisiana-based company, LaSalle Corrections, which operates several jails and prisons converted into immigration detention centers since last year.

Cox, the ICE spokesman, said the agency used pepper spray “when the ICE detainees refused to comply despite repeated attempts by facility staff and ICE officers to disperse the group and restore orderly operation of the facility.”

“This was a calculated use of force, consistent with agency protocol,” Cox said.