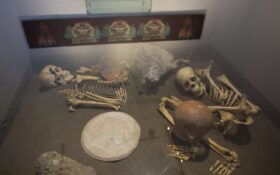 A couple in Las Vegas said they will have to wait to continue building their pool after construction crews unearthed a set of bones dating back to Earth’s most recent ice age.

Matt Perkins and his husband, who recently moved from Washington state to a newly built home in Nevada, said police and crime scene investigators showed up Monday at their home to analyze the bones.

“The pool guy said he was going to come to check out the pool,” Perkins told KTNV-TV. “We assume that was normal, we wake up he’s out front with the police.”

The pool builders discovered the bones about five feet (1.5 meters) below ground. After an investigation, police said the bones did not belong to a human and raised no law enforcement concerns.

Nevada Science Center Research Director Joshua Bonde said the bones are between 6,000 and 14,000 years old and are those of a horse or similar large mammal.

Bonde said the area where they were found was fed by natural springs and served as a watering spot for wildlife in the arid Mohave Desert about 14,000 years ago.

The backyard discovery came near Tule Springs Fossil Beds National Monument, where rare fossils such as mammoths have been unearthed before.

If people are digging in their backyard, it shouldn’t be a surprise when they hit something,” Bonde said. He also noted that the U.S. has laws that discovered fossils belong to property owners.

Perkins is now deciding how best to preserve the fossil.