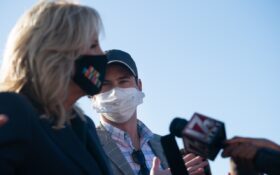 This summer, the White House has been seeing a wave of resignations.

Now, First Lady Jill Biden — after some gaffes and popularity problems — is watching an essential staffer leave the White House.

“For nearly three years, from the campaign to the White House, Michael has brought an encyclopedic knowledge of politics and media to my team as my spokesperson and adviser,” the first lady told CNN. “On a small team, loyalty and friendship are lifelong – we will miss Michael. However, we are excited for him to begin a new chapter in his career.”

LaRosa became Jill Biden’s chief spokesperson in November 2019 amid Joe Biden’s campaign for president. Finally, he landed in Biden’s White House as “Special Assistant to the President and Press Secretary to the First Lady of the United States,” according to his LinkedIn profile.

Before entering politics, LaRosa worked as a producer for MSNBC’s Chris Matthews until 2017… around the time of the MSNBC host was ousted over misconduct.

After leaving MSNBC, LaRosa found work on Capitol Hill. He worked as communications director for the Senate and a policy communicator for House Speaker Nancy Pelosi.

Now, LaRosa is set to become a manager at a public relations firm in Washington, CNN reported. He has not updated his LinkedIn profile to reflect the resignation.

Of course, La Rosa is leaving Biden’s communication department amid some P.R. problems for the first lady.

Like the president, the first lady has seen a drop in her approval ratings. LaRosa, it seems, has had enough.