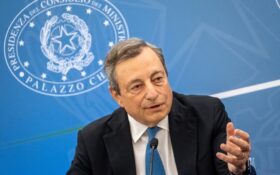 Italian Premier Mario Draghi has told his Cabinet he will offer his resignation on Thursday evening to the president, following the refusal of a coalition ally to support a government bill.

“The majority of national unity that has sustained this government from its creation doesn’t exist any more,” Draghi said in a statement released by his office.

It will be up to President Sergio Mattarella to accept or reject the resignation. But if the government crisis can’t be resolved quickly, Mattarella could pull the plug on Parliament, setting the stage for an election as early as September.