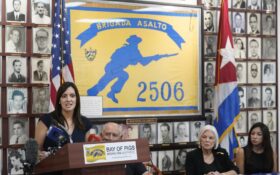 A liberal group — backed by billionaire leftist donor George Soros — is in the process of buying the iconic conservative radio station that serves the Cuban exile community and offers an unapologetic anti-communist view in Miami, Florida.

The $60 million buyout deal is awaiting approval by the Federal Communications Commission (FCC).

Latino Media Network, a new network set to be made up of 18 Hispanic radio stations including Radio Mambi, was partially financed by Lakestar Finance, an investment group affiliated with Soros Fund Management. The stations, currently owned by Univision, would be controlled by Jess Morales Rocketto, a former Hillary for America and AFL-CIO employee, and Stephanie Valencia, a former Obama White House staffer, if the venture receives FCC approval.

The deal to buy out the conservative Latino station and have it run by former Obama staffers was first reported in June.

“This is about controlling the flow of information to a specific community for political purposes, and that is what makes this deal, I think, so controversial,” Bonilla told Fox News Digital.

“You’re looking at the shutdown or the radical restructuring or the reformatting… of an iconic radio station, a station that for decades has been a beacon to Miami’s Cuban-American community,” Bonilla said at the time.

Radio Mambi “has been really the community’s voice politically and culturally. It’s a beacon of anti-communism, and so these are the concerns that emerged as a result of this transaction.”

Ubieta called the buyout a “stab in the heart” and claimed she was offered a large sum of money to sign a non-disclosure agreement, but refused.

“They told me that I will receive half the money as soon as they get the FCC approval and then the rest of the money when Soros people take over,” she reportedly told Fox News.

“I don’t want to be part of the deal,” Ubieta said. “I’m not going to sign the papers and I quit.”

Ubieta told Fox News that she will instead focus “100%” on her other radio show on Americano Media, a Miami-based station that broadcasts nationally through SiriusXM. She had previously worked at both radio stations.

“I was very happy doing both, but then the situation came along with the selling of the [Univision] stations,” she said. “I’m focused 100% on Americano.”