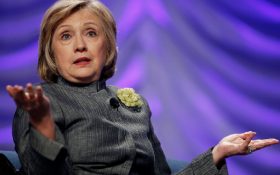 The Democrats and the mainstream media are trying to influence voters by pushing a critical narrative regarding President Donald Trump’s connections with Russia.

But they won’t tell you about THIS.

The payments, made over a six-month period, were to ensure Podesta’s support for ending financial sanctions on Russian banks.

Podesta, the chairman of the Podesta Group, was listed as a lobbyist for Sberbank in the United States, according to lobbying disclosure forms first discovered by The Daily Caller. A large cash reward from the Russian bank wasn’t all the foreign cash he earned that year, either.

“His firm received more than $24 million in fees in 2016, much of it coming from foreign governments, according to the nonpartisan Center for Responsive Politics,” Daily Caller wrote.

The Podesta Group, made up of Clinton pals and Democrat insiders, charged Sberbank $20,000 a month — plus expenses — to rub elbows on their behalf between March and September 2016.

“The discovery of high-profile Democrats like Podesta being paid lucrative fees for lobbying to lift U.S. sanctions on Russia contrasts with charges from Democrats that President Donald Trump and his key aides are soft on Russia while the Obama administration was tough on Moscow.”

Hillary Clinton-loyalists, of course, have been repeatedly blamed by the Trump administration for spreading rumors to the media that the president has ties to Russia.