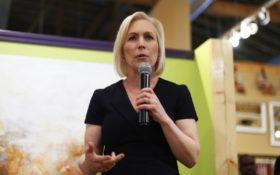 Sen. Kirsten Gillibrand, D-N.Y., was the first major Democratic to call for her colleague Al Franken’s resignation in 2017 as he faced allegations of sexual misconduct, building a profile as a leading advocate for women that became the centerpiece of her 2020 presidential bid.

But the New York senator is under fire for remaining quiet after sexual harassment allegations hit closer to home — those against her state’s Democratic governor, Andrew Cuomo.

In a series of statements, Gillibrand has said accusations of offensive behavior by Cuomo are “serious and deeply concerning” and that the three women “who have come forward have shown tremendous courage.” She has said that the claims against Cuomo are “completely unacceptable” and called for a full investigation — but won’t demand his resignation.

Top Democrats in New York and nationally have similarly refrained from demanding Cuomo step down. That includes New York’s senior senator and the chamber’s majority leader, Democrat Chuck Schumer. It’s a far different approach than the parade of Democratic senators who followed Gillibrand’s lead in calling for Franken’s resignation, and their statements against former President Donald Trump.

That’s fueling questions about whether, more than three years into the #MeToo movement, the liberal movement is losing steam. Gillibrand paid a political price for her role in the Franken resignation and her tone toward Cuomo may reflect that.

“Our country needs to do better for women writ large,” said Rachel O’Leary Carmona, executive director of Women’s March, an advocacy group that grew out of the January 2017 demonstration when tens of thousands of women, most clad in pink, descended on Washington to protest Donald Trump’s presidency. “Both parties and at every level of government.”

Franken ultimately resigned, but Democrats later questioned whether they had moved too quickly to oust him. During her presidential campaign, Gillibrand faced questions about her decision and insisted she didn’t regret calling for Franken to give up his Senate seat.

But she acknowledged that doing so hurt her with top donors and may have hampered her effort to win a following in the leadoff caucuses in Iowa, which borders Franken’s state of Minnesota.

Pete Buttigieg, who won Iowa, has said that when it came to Franken, he would “not have applied that pressure at that time before we knew more.” The former mayor of South Bend, Indiana, is now President Joe Biden’s transportation secretary.

Carmona’s group has gone a step farther than Gillibrand and other leading Democrats, calling for an investigation against Cuomo but also demanding his “immediate resignation,” noting that “conduct doesn’t have to be illegal to be disqualifying.”

Cuomo flatly rebuffed such calls Wednesday, saying that while he was “embarrassed” by the allegations, he has no intention of resigning.

“I work for the people of the state of New York,” the governor said, breaking days of silence during a news conference. “They elected me.”

A spokesman for Gillibrand declined to comment on whether the senator considered calling on Cuomo to resign. But, even in 2017, Gillibrand spent weeks calling for an investigation into Franken and only became the first Democratic senator to say he should step aside when word of a seventh woman accusing misconduct surfaced.

She also has argued that a “double standard” was at work, with her getting blamed for her party losing a once-rising star in Franken even though so many Democrats eventually called for his resignation.

“Who is being held accountable for Al Franken’s decision to resign? Women senators, including me,” Gillibrand said in July 2019, about a month before she left the presidential race. “It’s outrageous. It’s absurd.”

Gillibrand has promoted herself as a feminist leader and champion of women’s rights, and the Cuomo scandal concerns her state.

She also founded an activist group called Off the Sidelines, which raised millions of dollars to help mobilize more women to participate in politics, and for years relished being sometimes called the “#MeToo Senator.”

Already a senator for a dozen years, the 54-year-old Gillibrand has time to mount another presidential run, though questions about her handling of the scandal involving Franken — and now perhaps even her reaction to Cuomo — may linger.

Some allies in New York have defended Gillibrand’s apparent double-standard.

“We need to stop blaming women for men’s harassment,” said Rebecca Katz, a Democratic consultant in New York City . “Sen. Gillibrand took a lot of incoming for rightly calling out Al Franken many years ago — for being one of many to call out Al Franken. We’re doing this wrong.”