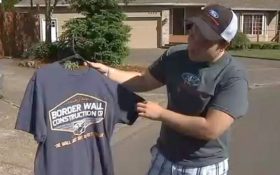 A high school student from Oregon is suing his school after he was banned from wearing a pro-Trump t-shirt in class.

Liberty High School senior Addison Barnes had prior knowledge that his class would be discussing illegal immigration on a day back in January, so he wore a shirt expressing his pro-American political views.

The student was threatened with a suspension, despite the fact that his teacher’s liberal pro-sanctuary city poster was permitted in the classroom.

Barnes’ t-shirt featured a logo that read, “Border Wall Construction Company,” and read beneath the logo, “The wall just got 10 feet taller,” a quote from President Donald Trump.

“The t-shirt was just a representation of my political beliefs,” Barnes explained. But school officials said it went too far.

Assistant Principal Amanda Ryan-Fear had Barnes removed from class and insisted he cover the shirt because a student and a teach complained it offended them.

Barnes was forced to comply, and covered the shirt with his jacket.

“I thought to myself, ‘You know this isn’t right, this is my First Amendment right to be able to wear this shirt,’” Barnes told the station. “So I took off the jacket, and the assistant principal had seen that and sent for a security guard to escort me out of class.”

Barnes was then returned to the Assisstant Principal’s office where he was threatened with a suspension for “defiance.”

“She gave me the option to cover the shirt or get sent home,” Barnes explained. So he went home, and the school treated it as a suspension.

Ironically though, the school does not find liberal political views inappropriate.

“I had a teacher who had a pro-sanctuary city poster in her room which was up all year,” Barnes said, “yet as I wear a pro-border wall shirt I get silenced and suspended for wearing that.”

“This school is very Latino populated,” senior Mark Guzman explained. “[The shirt] offended a lot of people. In the hall, kids would ask me if I’d seen it.”

Barnes has since filed a federal lawsuit against his high school for nominal damages, stating his First Amendment rights were violated.

“He was told he offended them, but that’s a far cry from being disruptive, and it is certainly a far cry from violating school policy, let alone what is clearly First Amendment free speech law,” McLane noted.

Why is it acceptable for a teacher to display her liberal opinions, but the student cannot display his conservative opinions?

Barnes, along with all other conservatives, have a right to free speech and no school should bar a student from displaying their opinions just because they do not agree with them.