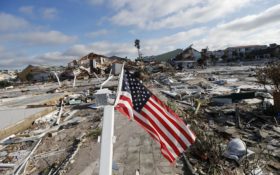 Hurricane Douglas gathered strength as it barreled west toward the Hawaiian Islands on a track to potentially bring strong winds and flash flooding to the island chain over the weekend, weather forecasters said.

The storm had maximum sustained winds of 100 mph (155 kph), making it a Category 2 hurricane as of late Wednesday, the National Hurricane Center said.

Cooler waters east of Hawaii and wind shear were expected to weaken the storm before it reaches the islands. The weather service said it’s likely to be either at hurricane or near-hurricane strength when it arrives.

It’s too early to predict the precise path of the storm in the islands. Bravender said any part of the state could be affected.

Douglas was 1,570 miles (2,530 kilometers) southeast of Hawaii as of late Wednesday.

In the Gulf of Mexico, Tropical Depression Eight formed and a tropical storm warning was issued for much of the Texas coast.

The depression was located about 530 miles (852 kilometers) east-southeast of Port O’Connor, Texas, with maximum sustained winds of 30 mph (48 kph). It was moving west-northwest at 9 mph (14 kph).

The center of the depression is expected to move across the northwestern Gulf of Mexico on Thursday and Friday and make landfall along the Texas coast on Saturday. Slow strengthening is expected and the depression could become a tropical storm in a day or so.

The storm is expected to produce 2-4 inches (5-10 centimeters) of rain with isolated totals of 6 inches (15 centimeters) along the Gulf Coast from Louisiana to the lower Texas coast, and inland through south-central Texas and the Rio Grande Valley. The depression is expected to generate swells that produce life-threatening surf and rip conditions that will affect much of Texas and Louisiana.

Meanwhile, recently formed Tropical Storm Gonzalo was strengthening in the Atlantic and the center said it was expected to become a hurricane by Thursday.

As of Wednesday evening, Gonzalo was centered about 1,045 miles (1,681 kilometers) east of the southern Windward Islands with maximum sustained winds of 60 mph (96 kph). It was heading west at 12 mph (19 kph).

The Hurricane Center said that interests in the Windward Islands should monitor the storm as it is expected to approach the islands late Friday and Saturday. A hurricane watch has been issued for Barbados.

Gonzalo’s strengthening breaks a record set by Tropical Storm Gert, which formed on July 24, 2005. So far this year, Cristobal, Danielle, Edouard and Fay also set records for being the earliest named Atlantic storms of their respective place in the alphabet.